1400 Years Later Islam is Still Waging War on the World

1400 Years Later Islam is Still Waging War on the World

Why did 19 muslims attack the United States on 9/11/01?  Why do muslims attack people with knives, cars, planes, vest-bombs, and anything else they can get their hands on today?  According to the Koran, Islam’s prophet Mohammad is the most perfect human being for all muslims for all time, and he commanded muslims fight the non-muslims with all means possible.

“Ye have indeed in the Messenger of Allah (Mohammad) a beautiful pattern of conduct…”  Koran 33:21

Mohammad is a “beautiful pattern of conduct” for all muslims for all time.

Mohammad condoned the killing of those who mocked him, tortured, allowed the taking of sex slaves, married a six year old girl, participated in the beheading of up to 900 Jews after the Battle of the Trench, told his followers they must wage war against non-muslims until the world is under Islamic rule, and waged dozens of battles against non-muslims.

When Mohammad died in 622 AD his successors simply followed in his footsteps and continued waging war against the non-muslim community.

When this “beautiful pattern of conduct” is taught to children over centuries, many are bound to act on it.  And so they have.

In unprovoked attacks, Muslims conquered Jerusalem in 636 AD and marched into modern day France in 732 AD at the Battle of Tours. For over 360 more years, Islam’s unprovoked aggression bled into the West until the First Crusade was finally declared in 1095 by Pope Urban II to defend Western Civilization. 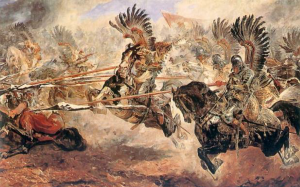 Down through the centuries, jihad was consistent in Islam.  From the Battle of Lepanto in 1571 – where the West defeated Islam in arguably the greatest Naval upset in the last 500 years – to the Gates of Vienna in 1683, Islam has consistently followed the example of their prophet in attacking the non-muslim world.

Islam conquered Spain in 711 AD and held it captive until the Reconquista in 1492 leading to the launch of Columbus into the Americas that same year.

In 1782, Ambassadors John Adams and Thomas Jefferson met with the Ambassador to Great Britain from Tripoli.  When they asked him why Islamic forces were seizing American ships and kidnapping Americans, they were told Islam commands warfare against unbelievers.

Read the text of Jefferson/Adams’ letter to the Continental Congress here.

When Thomas Jefferson became President, he launched America’s first military action after the Revolution and sent the Marines to Tripoli in ending Islam’s tyranny of American shipping and giving the U.S. Marines a line in their hymn “to the shores of Tripoli.”

Islam wages war on America and the rest of the non-muslim world because Islam commands it until the world is under Islamic rule.

Mohammad is their “perfect example” and they are just following in his footsteps.