Will 2018 Mid-Term Elections Bring the Reckoning ?

Today, Tuesday November 6, 2018, is election day across America, and there is much at stake.

Will this day be the beginning of the true reckoning to hold accountable those guilty of sedition, treason, and plotting to overthrow the government of the United States?

While it may exciting for some to read Tony Shaffer’s tweet to John Brennan that it is only a matter of time before Brennan will be in handcuffs, the ground truth reveals Patriots at the ground level are facing a real war that most Republicans in Washington continue to ignore.

In Georgia, the terrorists of the Black Panthers publicly sport weapons while supporting Marxist candidate Stacey Abrams for governor in Georgia.

In Minnesota, after police made the remarkable move to publicly tell citizens not to vote for Keith Ellison for the state’s Attorney General, the jihadi Congressman was seen walking the State Fair and spending over an hour with a leader of the terrorist group Antifa. 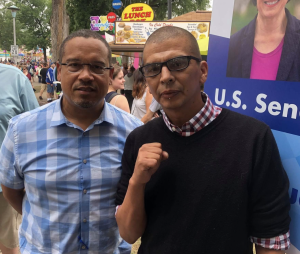 Like all of the mainstream media, the New York Times again stands with jihadis – the enemies of liberty – as they refuse to quote Asia Bibi, the Christian Pakistani woman recently acquitted of blasphemy under sharia in Pakistan.  Why?  Because the New York Times says they do not want to commit blasphemy themselves by repeating Bibi’s words and, thereby, insult Islam.  As a side note, Bibi, cannot actually be freed in Pakistan because thousands of muslims are waiting for her to leave custody so they can kill her.

As Understanding the Threat (UTT) travels the United States, hundreds and thousands of police and local officials continue to openly share they were not aware of the massive Islamic threat nor the jihadi network in the United States until they were trained by UTT.  Nor were they aware, they say, of the collusion between the Islamic and Marxist Movements (Counter-States), as demonstrated (e.g.) by the above photo of jihadi Keith Ellison and Marxist Luis Marquez.

Yet, Patriots in local communities across America addressing these threats by speaking truth and calling on officials to deal with these threats are met with:  silence from Republicans; confusion or pushback from police untrained in these matters; calls for violence from Marxist leaders and organizations, like the Southern Poverty Law Center, Antifa, Black Lives Matter and others; calls from jihadi organizations like Muslim Advocates, Hamas doing business as the Council on American Islamic Relations (CAIR), and local jihadi mosques and organizations for these Patriots to be silenced; and death threats from the Marxists and/or Islamic Counter-State actors.

What UTT readers need to understand is that these attacks are not random responses to Representative Shea’s policy views.  This is a coordinated attack to shut him down.  Along with these attacks have come numerous death threats.

Similar credible death threats have been levied against many people speaking the truth about these threats including Steve Amundson of the Counter Jihad Coalition, Pamela Geller, Robert Spencer, Laura Loomer, UTT President John Guandolo, and others.

So what is today’s election truly about?

On the one hand, the most important elections are at the local level, because that is where the Marxist and Islamic Counter-States will be engaged and defeated.  This war will not be won or lost at the national level but at the local level.

That said, Patriots at the ground level would appreciate some support from a functional federal government.

Today’s election will reveal if local towns will be led by Patriots willing to address real threats to liberty at the local level or whether Marxists will retain control of the local power centers across the U.S.

At the federal level, the answer will truly come in January, when Americans will see if Republicans will speak truth boldly about real threats OR if they will continue the policies of Paul Ryan and Mitch McConnell, ignore the Islamic and Marxist threats, continue to grow the deep state, and lead America further into oblivion.