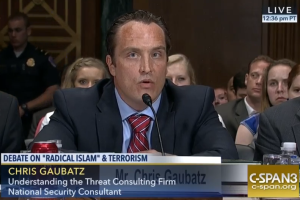 UTT’s Chris Gaubatz testified on Capitol Hill Tuesday before a U.S. Senate hearing on the use of the term “Radical Islam” in discussing the terrorism threat to the United States.

Mr. Gaubatz set the stage with laying out the threat America faces from the Global Islamic Movement:

“UTT is the only organization in America which trains law enforcement, intelligence professionals, military, and leaders on the threat from the Global Islamic Movement, the doctrine of jihadi groups, and how to identify, investigate, and dismantle them.  At UTT, we hold the firm belief that in order to defeat the Global Jihad, we must understand the enemy. US military war fighting doctrine, specifically the , ‘Intelligence Preparation of the Battlefield Manual’, states war-planners must begin all analysis of the enemy threat with (1) who the enemy says they are, and (2) why they are fighting us.  That becomes the basis for determining the enemy threat doctrine, which, in the case of jihadis, is sharia – Islamic law. Universally, the enemy – jihadis – whether they are ISIS, Al Qaeda, or the Muslim Brotherhood, all state they are Muslims waging jihad in the cause of Allah to establish an Islamic State (Caliphate) under sharia.”

“During my time conducting undercover research as an intern with Hamas, both at CAIR MD/VA in Herndon, VA, and CAIR National in Washington DC, I preserved documents that revealed Hamas doing business as CAIR:

*Conspired to cover-up fraud committed by one of their attorneys
*Discussed coordinating with Bin Laden and his associates
*Placed staffers and interns inside congressional offices
*Conspired to influence congress, specifically judiciary, intelligence, and homeland security committees
*Impact congressional districts, tasking each Hamas Chapter with influencing at least two legislators
*Ordered books from the Saudi embassy on the virtue of jihad and martyrdom
*Worked with a Muslim law enforcement officer to influence a major terrorism investigation by accessing a classified federal police database and tipping off the suspect

“The current administration and the US national security apparatus continues to use leaders of Muslim Brotherhood groups like ISNA, the Muslim Public Affairs Council (MPAC), CAIR, and others to provide direct input into American foreign policy and domestic counter-terrorism strategies.”

With a strong finish, Mr. Gaubatz made clear the dire threat America faces if we do not reverse course immediately and address the enemy.

“According to our enemy – the Global Islamic Movement, made up of many groups including Al Qaeda, ISIS, the Muslim Brotherhood, Tabligi Jamaat, Boko Haram, Hamas, Hizbollah, many nation states including Pakistan, Iran, Saudi Arabia, and many others – they all seek to impose sharia on the planet. It is also the blueprint from which they create their war-fighting strategies. From a U.S. war-fighting perspective, that naturally makes sharia the enemy threat doctrine and adherents to sharia a direct threat to the Republic. Until American leaders and national security professionals identify the threat and formulate policies and strategies that address adherents to this ideology we will continue on our current path of defeat and eventually lose this war here at home as we did in Iraq and Afghanistan.”

Leave a Reply to Kristi Ann