American Airlines, one of the largest airlines on the planet, recently gave a leadership award to Hamas leader Mohamed El Sharkawy, who is in charge of American’s Line Maintenance Training at their Phoenix, Arizona hub.

The September edition of American Airlines’ magazine – American Way – revealed Mohamed El Sharkawy received the 2015 Earl G. Graves Award for Leadership in Diversity and Inclusion “for (his) work in making a lasting impression in the workplace.”

The award was given to Sharkawy at the end of June, but was published in American Airlines’ American Way in September. 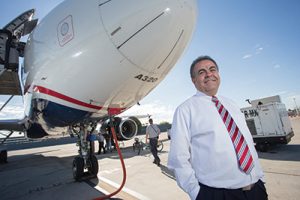 Mohamed El Sharkawy was previously the Director for Hamas in Arizona, doing business as the Council on American Islamic Relations or CAIR.  Evidence, some of which is listed below, reveals CAIR was created by the US Muslim Brotherhood’s Palestine Committee (Hamas) in 1994 to be a node for Hamas in America to provide the Hamas cause with “media, money, men, and all that” meaning propaganda, fundraising, recruits, and all else that comes with waging jihad.

Is this the kind of individual who should have access to sensitive areas of Phoenix Airport or American Airlines?

El Sharkawy is also serves as the Chairman of the Arizona Muslim Police Advisory Board.

A massive amount of evidence collected over the past 20 years exists revealing CAIR is a Hamas organization.  Here are a few highlights:

This information constitutes a small amount of the massive evidence that CAIR operates as a Hamas entity in the United States.  Hamas is a designated terrorist organization.  Their leaders should be in jail, and should certainly not have access to our airlines, airports, or infrastructure.

UTT encourages citizens who fly on American Airlines to contact them and ask why they employ a terrorist.