Another Jihadi Attack in NYC – Another Incoherent Response

New York’s Deputy Police Commissioner John Miller said the attack had nothing to do with Islam. 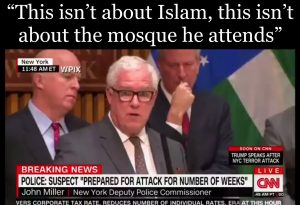 This week, a sharia-adherent muslim named Akayed Ullah wore an explosive vest that prematurely detonated, wounding Ullah and several others.

On the CBS Morning Show this week, John Miller said:

“(Ullah) was not particularly struggling financially or under any known pressure…was not on our radar at the NYPD, not on the FBI radar.”

Translation:  “We have no idea what the motive could be.”

Miller continued:  “He’s somewhat characteristic of what we’ve seen across the world, which is somebody who turns up one day out of the blue.”

Out of the blue?  Is this a serious response.  If NYPD believes this jihadi simply turned up out of the blue, it necessarily means there is no hope of preventing such attacks in the future.

But this jihadi, like all jihadis, did not just turn up “out of the blue.” 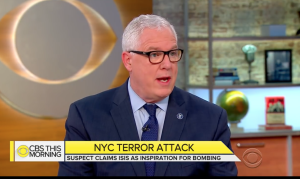 When asked “How hard is it to stop a lone wolf like this?” John Miller responded with:

“It’s very difficult, and its getting harder.  This is not the Al Qaeda model…this is a situation…where you have people who are consumers of this propaganda…where the conspiracy is within the confines of their own mind and that is a very hard place to get to.”

What propaganda are these “terrorists” consuming?

These attackers, the Chelsea bomber, the 9/11 hijackers, and all the other muslim “attackers” in the United States have identified themselves as muslim waging jihad in the cause of Allah to establish an Islamic State (caliphate) under sharia.

All Islamic doctrine mandates warfare against non-muslims until sharia is the law of the land on the entire earth.

Has John Miller read any sharia?

Do New Yorkers care about this incoherent leadership at NYPD?

Thank goodness in both of these cases these jihadis openly stated their support for the Islamic State or we would still have no idea why they did what they did.