“But is the mosque only for prayers?  No.  The mosque is the center for all Islamic activity as it used to be in the mosques of the Prophet in Medina.  In these mosques, not only prayers took, place, but it was a school of knowledge where companions used to study the Quran and ask questions.  It was a place for the Government to receive delegations from foreign countries.  It was a treasury from which charity work was done and it was a war-room where decisions and planning for wars imposed on Muslims were made.”  A Quote from Islam-USA.com on Mosques 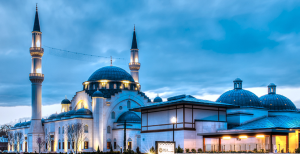 The $110 million Diyanet Islamic Center of America opened in April 2016 in Lanham, Maryland.  The opening was hosted by Turkish President Ergodan

Many people in the West are significantly confused about the true nature of a mosque.

To understand what a mosque is, one must first understand what Islam is. To be a “muslim” is to be one who submits to Islam. To submit to Islam is to submit to the law of Allah – sharia.  100% of all sharia mandates jihad until the world is under Islamic rule (sharia).  Jihad is only defined in sharia as “warfare against non-Muslims.”

In a video HERE, former Islamic scholar and professor of sharia, Sam Solomon (name he uses since his conversion to Christianity), details a mosque is the center of Islamic government and much more than a place to pray.

According to Islam, the perfect example for all mankind is Mohammad.  The koran says so.

“And thou (Mohammad) standest on an exalted standard of character.”  Koran 68:4

“Ye have indeed in the Messenger of Allah a beautiful pattern of conduct for any one whose hope is in Allah and the Final Day, and who engages much in the Praise of Allah.”  Koran 33:21

Why do Muslims step their right foot into the mosque first? Because Mohammad did it.

Why is it unlawful for Muslim men to wear gold? Because Mohammad forbid it.

Why is it okay for a 60 year old Muslim man to marry a 7 year old girl? Because Mohammad married Aisha when she was 6 and consummated the relationship when she was 9.

Why is it okay for Muslims to war against non-Muslims? Because Mohammad said it and Mohammad did it.

How did Mohammad use the first mosque in Medina?  It was used for: social gatherings; for legal rulings; for teaching Islam; for storing food, water, ammunition and weapons; for housing jihadis; for planning battles; and it was the place from which jihadi was launched.

Mosques are the center of the Islamic State, and the places from which Islam enforces its will on the community and on the world.

This is why all over the world, military and security services continue to find weapons and explosives in mosques, and the mosques teach jihad is obligatory for the muslim community.

The mosques our military went into in Iraq and Afghanistan had weapons.

The mosques recently raided by European security officials had weapons or evidence of weapons and/or explosives training.

As a matter of fact, UTT’s Chris Gaubatz went into mosques around the United States posing as a Muslim and discovered most of them advocate violence and have literature advocating/supporting violence against non-Muslims.

The “Mapping Sharia” research project conducted between May 2007 and May 2010, reveals 51% of U.S. mosques advocate violence and another 30% have texts that support violence.

The Center for Religious Freedom (Freedom House) published a report in 2005 – with Former CIA Director R. James Woolsey as its Chairman – revealing a large number of mosques in America are owned and funded by the government of Saudi Arabia, and teach American muslims they must wage jihad against non-Muslims, hate non-Muslims, and they can never truly be “citizens” of a non-Muslim state, among other things.

Here are some other noteworthy news stories affirming mosques are not simply places of worship for Muslims:

After the jihadi (“terrorist”) attacks in Tunisia in the summer of 2015, the Tunisian government moved to close 80 of the 100 remaining mosques there.  The head of Tunisia’s association of imams said police searches uncovered weapons in 40 mosques around the country in 2014.

The largest mosque in Madrid was a jihadi recruitment center run by a former prisoner at the Guantanamo Bay, Cuba U.S. facility for terrorists (Dec 2014).

One of the largest mosques in Switzerland was raided because the Imam instructed his followers that Muslims who do not attend mosque and pray should be killed (Nov 2016).

Netherlands authorities thwarted a plot centered at a mosque to massacre Jews at a local synagogue (Nov 2016).

The Oklahoma Mosque attended by jihadi Alton Nolen, who beheaded his co-worker, taught attendees they must establish a caliphate under sharia and destroy the US (Sep 2014).

Russian officials arrested the Imam of a Mosque and found explosives there (Jan 2016).

At two separate mosques in Afghanistan in (March 2014) and (April 2016) Muslims blew themselves up in the mosques while making explosives.

A large mosque in Gaza was struck by Israeli military officials because it contained weapons (July 2014).

In April 2015 the Imam of the Grand Mosque called for an all out war against all Shiites and Christians. This Imam is one of the most respected leaders in the Islamic world.

The chairman of Al Azhar (who is ranked #1 among the 500 most influential muslims on the planet) calls for jihad against unbelievers.  Al Azhar University is the oldest and most respect school of Islamic jurisprudence in the world.

This might explain why in Denmark only 14% of mosques distance themselves from ISIS and ISIS ideology (April 2015).

For more information see UTT’s article “What is the Purpose of Islamic Centers/Mosques in America” from January 2016.

And, as always, ensure your local leaders know CAIR is Hamas so when CAIR starts yapping to con your leaders into believing they are friendly, your leaders will know better and treat them like the terrorists they are.