“We want to encourage you as a leader in the law enforcement community to host a training from UTT (Understanding the Threat) for their 3-day ‘Understanding and Investigating the Jihadi Network.’

This is the only training program for law enforcement in the nation which actually gives officers ways to proactively find terrorists in their communities, map out the terrorist network in the community, and create innovative investigative strategies to aggressively tackle the threat at the local level.  This is also the only program in America working with law enforcement and state leaders to develop strategies to dismantle the terrorist networks at the local and state level.” 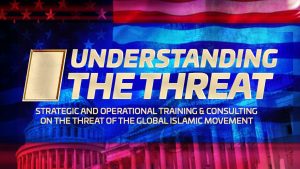 As 2017 begins, the threats to the United States from the Global Islamic Movement, aided by its hard-left/marxist allies, is greater than ever.

UTT is the only organization providing:  law enforcement with specific ways to identify and locate jihadis (“terrorists”); analysts and intelligence professionals with a key understanding of how to assess the threat; and leaders with strategies to dismantle the networks at the state level.

UTT speaks truth about the threat in a clear and concise manner unhindered by the noise of what some people wish the threat is.   At UTT we know America cannot win a war if we fail to unhesitatingly call out the enemy for who it really is.

We will not defeat the Global Islamic Movement and its allies by using “moderate” or “reformist” muslims, nor can we hope that “good hearted” Islamic scholars are going to move the global muslim community towards a more peaceful “version” of Islam.

We must address the threat as our enemy states it and deal with it at that point.  This is how we fight and win wars.  Failure to do this will lead us to defeat, as was handed to us in Iraq and Afghanistan.

Join UTT’s efforts to lead the ground-level assault on the enemies of our nation.  We need your help!

Bring the 3-Day UTT training program to your community.

Share the successes and work of UTT with others.  Financially support our efforts.  Reach out to us and let us know how you might help us in other ways.  You are needed.

Join UTT as we put freedom back on the offensive where it belongs.

“I have never had training that woke me up and was more valuable to me than this. Unbelievable!”