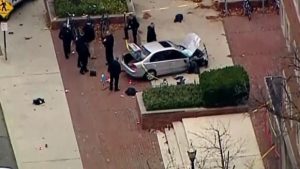 UTT readers know, this war in which we are engaged with the Islamic Movement in the United States is primarily an Information War.

A Muslim refugee from Somalia named Abdul Razak Ali Artan is “scared” to pray so he tries to kill non-Muslims on the Ohio State University (OSU) campus with his vehicle and a knife before being shot dead by an OSU police officer.

What he did was legal under sharia (Islamic Law).  Its all about sharia. 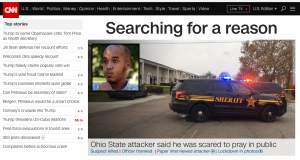 Fox News says “The motive behind the attack is still unclear.”

NBC news writes “Officials cautioned that they have not determined a motive for the ambush.” 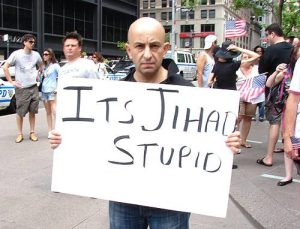 Where are the credible journalists?

A Somali Muslim plows over people with his car, then jumps out with a knife yelling allah u akbar.  For the media to say they do not know the motive is for the media to be waging an information campaign for the enemies of the United States. 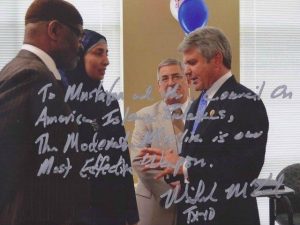 In come the political elite:  House Homeland Security Chairman Michael McCaul (R-TX) said “we do not yet have confirmation of terrorist connections” to the attack, but he added “this is the type of indiscriminate violence our enemies are urging their followers to use against us.”

Sorry Congressman, this is not “indiscriminate violence.”  This is jihad being waged for the purpose of establishing a caliphate under sharia.  More specifically, this is jihad waged to cause fear to get Americans to further submit to Islam.  Abdul Artan was “scared” to pray because Americans were not providing an environment with more room for sharia.  Therefore, we get violence.

Perhaps if Mr. McCaul were not so busy supporting the jihadis by pushing the CVE program, getting it funded, and doing the business of our enemies, he might have more time to study our enemy and do his duty.

Congressman Adam Schiff, (D-CA), the ranking member of the House Intelligence Committee, said Artan “may have been self-radicalized.”  What does that even mean?  “Self-radicalized?”  Abdul Artan was following the sharia which comes from the Koran and the example of the Muslim prophet Mohammad. And Adam Schiff serves on the “Intelligence Committee” for the United States House of Representatives.

And of course, in comes Hamas – doing business as the Council on American Islamic Relations (CAIR) – and no one in the mainstream media mentions they are a Hamas organization.  No one mentions they are terrorists. 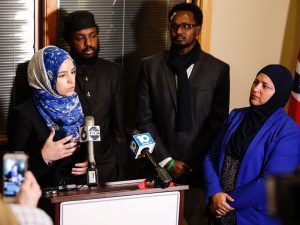 Hamas Leaders in Ohio speaking to their lapdogs in the media

CNN finished their piece by promoting CAIR as a soft and cuddly organization that just wants peace:       “As Ohioans, as Americans and as Muslims, we’re shocked by today’s senseless attack,” said Roula Allouch, national board chairman of the Council on American-Islamic Relations…Jennifer Nimer, legal director for CAIR’s Ohio chapter, urged the public not to jump to conclusions about Artan’s motive.

Americans elected Mr. Trump because there was some realization our leaders, media, and system has been utterly corrupted.  What will happen when they realize their leaders and media are working with our enemies against them with no response from federal law enforcement or intelligence agencies which have also been catastrophically corrupted?

Who can we thank for these continuing and increasing attacks?  Who can we thank for a disintegrating security in American hometowns?  President Obama, Mrs. Clinton, Mr. Kerry, Congressman McCaul, Governor Chris Christie, Governor John Kasich, Senator John McCain, Senator Marco Rubio, and all of the other treasonous officials in the American government who continue to provide aid and comfort for our enemies while denigrating people speaking truth about a clear and present danger to the American people and our communities.

It is time, citizens, to understand the threat.  Join UTT to educate, train, and prepare America for this growing cancer, so it can be defeated.  No matter who is President, this war will be won or lost at the local level.

Leave a Reply to Wendy Letter