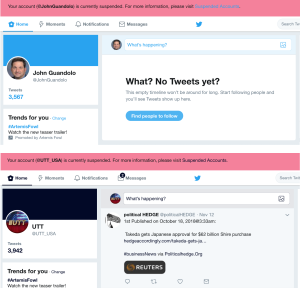 Twitter suspended the Understanding the Threat (UTT) account (@UTT_USA) and the personal account of UTT Founder/President John Guandolo (@johnguandolo) in a manner that stripped both accounts of all followers and gives no recourse to reactivate the accounts.

There has been no indication any of the tweets from either account, @UTT_USA or @johnguandolo, were factually incorrect.

In fact, previously, tweets from these two accounts are often sited for being “offensive” – and we all know who they offend – muslims. 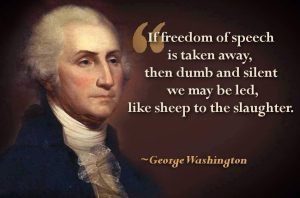 Islam defines itself as a “complete way of life (social, cultural, military, political, religious) governed by sharia (Islamic law).”  All sharia mandates “warfare against non-muslims” until the law of the land on the entire planet is sharia.  There is no other version of Islam.

When private companies like twitter suspend people for publishing tweets that are “offensive” they are, whether they know it or not, imposing sharia on U.S. citizens.

UTT believes twitter knows exactly what it is doing.

The Islamic and Marxist Counter-States in America seek to win the war, primarily, by controlling the message.  By controlling key communication nodes among the people – twitter, YouTube, google, facebook etc – and controlling the content, they move their agenda forward.

Patriots must develop a new media platform that is interactive and non-restrictive to the truth, and demonstrate great courage to speak truth given the opportunity.

Until that time, UTT encourages those who desire the truth to do the following and encourage others to do the same:

The truth must be spoken and shared.  Please do your part.

Leave a Reply to BRAD