Did Jihadis Just Execute a Bombing Operation at a CA Mall?

Did Jihadis Just Execute a Bombing Operation at a CA Mall?

Evidence reveals jihadis attempted to bomb the Los Cerritos Center in California this past weekend.  This is one more in a string of numerous incidents across the United States indicating an increase in willingness by jihadis to use violence to silence those who speak truth about Islam.

So it should come as no surprise when a muslim slides his backpack under the table at the Counter Jihad Coalition (CJC) booth in Cerritos, California and walks away.  Literally. 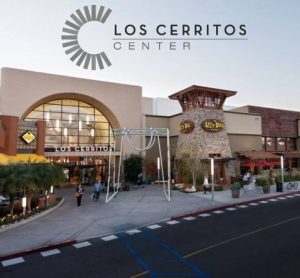 UTT assesses this incident as a thwarted jihadi attack.  Lets look at the facts.

Those of you who follow UTT may remember in August of 2017 UTT published an article on the Counter Jihad Coalition (CJC) and its leader Steve Amundson.

This weekend, Steve and his team, including a pastor, set up their booth in a busy part of a mall called The Los Cerritos Center in Cerritos, California near Los Angeles.  As they always do, CJC hands out literature about Islam and the threat it poses to America and free people.

Over the last 6 months, Steve has reported an increase in physical assaults on him and his team.

The day began with two men snapping pictures of the CJC booth, then getting on the phone.  Steve Amundson witnessed this and recognized it as “red flag one.”

Steve has seen this behavior before, and it is usually the scouts looking for the CJC booth in order to alert others. 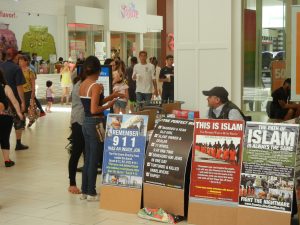 Later, two muslim women approached the booth and began cursing CJC’s people and calling them liars.  As mall security, which was standing in the immediate vicinity, was speaking with the women, a white haired muslim male moved over to the booth and slide his backpack under that table.  He then began speaking with the pastor from CJC. 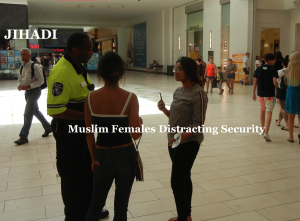 After a short conversation, the muslim man walked away.

Amundson approached the pastor assuming the man was a friend.  When the pastor told Steve the man was an irate muslim complaining about CJC’s activities, Steve was immediately concerned for their safety.  He called security to stop the man, which was done.

Here are Steve Amundson’s words to describe what happened:

“I told security he left a backpack underneath our booth. The Moslem refused to take the backpack. We started to take cover behind cement pillars and told security to either call the bomb squad or have the guy pick up the backpack. He finally agreed to very carefully pick it up and security escorted him away. Security will not say at least right now if he was arrested, if the bomb squad was called or what. Was this a dry run or the real thing?”

Based on conversations Steve Amundson had with authorities, it does not appear the man’s backpack was ever searched.

This is a very serious incident, and either a dry run for a jihadi attack or the real thing.  The evidence leads UTT to believe this was the real thing.

The jihadis continue to ratchet up their aggressiveness, attacks, and violence here in America.

Will the FBI aggressively pursue this, or continue working with the jihadis to ensure no one puts a piece of bacon on the door knob of the local mosque?