The Council on American Islamic Relations was created in 1994 by the U.S. Muslim Brotherhood’s Palestine Committee which is Hamas in America.

“Attempt to understand Islamic movements in the area, and start supporting Islamic groups including Mr. bin Laden and his associates”  (Proposed Muslim Platform for 2004 dated 3/08/04)

“The leadership of (MB organizations) are inter-related…having been identified as supporters of the Islamic Revolution as advocated by the Government of Iran (GOI).” 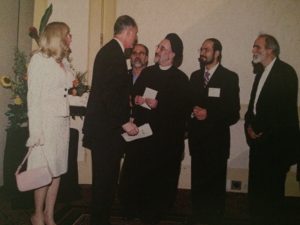 Former Iranian President Khatami being served by Shurat Hadin with a $1 billion legal action on behalf of 12 Persians imprisoned in Iran.  This took place at a Hamas (CAIR) function in Northern Virginia 2006.  Hamas leader Nihad Awad on the right of Iran’s Khatami. 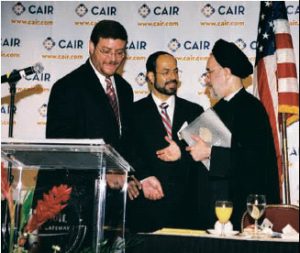 So when we see CAIR host the former President of Iran Khatami at a Hamas function in Northern Virginia, it is no surprise.

They are terrorists.  That is what terrorists do.

Keep this in mind as they get in front of the TV cameras to tell us all about the bombings in New York, New Jersey.

CAIR is Hamas.  Hamas is a terrorist organization.