Civilization Jihad at the Ground Level in Southern California

Civilization Jihad at the Ground Level in Southern California

Speaking truth about the danger Islam poses to civilized society is improper social etiquette in many parts of America these days – especially among America’s elites.

Yet a few dare to do it.  Understanding the Threat (UTT) certainly does.

The folks at the Counter Jihad Coalition in Southern California are also unafraid to speak truth in love about Islam.  They do so boldly on a regular basis.

Led by Steve Amundson, the Counter Jihad Coalition (CJC) operates under a simple premise:  “Get the truth and facts about Islam to the general public.” 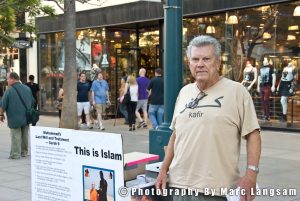 The group goes out every other Saturday to various public places in southern California including on the streets, in malls, and elsewhere to hand out pamphlets, engage people, and speak truth about Islam. Amundson says the group passes out between 1500 and 2000 pamphlets each weekend they are out. 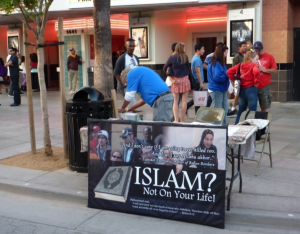 UTT’s President, John Guandolo, had the pleasure of interviewing Mr. Amundson for this week’s UTT Radio Show.  The full show can be found at www.WorldviewRadio.com.

Steve Amundson told UTT he does what he does out of love of liberty and a desire to see America remain for future generations.

But the truth always offends those who do not have it.

A number of people thank Amundson and the Counter Jihad Coalition for their courage and perseverance in speaking truth, but some people – muslim and non-muslim alike – are not as encouraging or receptive.

Amundson says, “Some of these Christians who believe the interfaith dialogue groups are the way to go, you just can’t get through to a lot of them.”

He goes on to say, “Its the muslim usually that want to tie us up all night long talking, and our real purpose is to get the word out to as many people that don’t know anything about Islam. So we try to minimize our discussions or debates with the muslims so we can get back to passing out brochures to people who want some information and want to know what the truth is.”

Steve Amundson engaging muslims on the streets of southern California

What is probably shocking to many people who are unaware of Islamic beliefs is how some muslims respond.  In THIS VIDEO of CJC interacting with muslims in Santa Monica, California, the muslims openly state their support for killing those who commit adultery and chopping off hands for stealing. 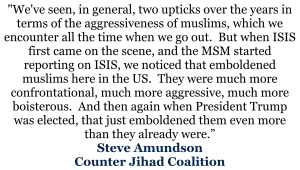 Last weekend, the Counter Jihad Coalition met with significant resistance from muslims, and Steve Amundson had to call in backup from mall officials and police. 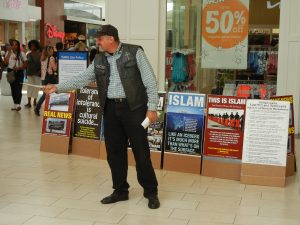 Steve tells the story this way:  “We’ve had a few violent outbreaks when we go out to do our public outreach – a couple of times up in L.A. and then just last Saturday actually.  At a local shopping mall, muslims showed up and started yelling and shouting, and more muslims joined in with them and they were right in our face yelling and shouting.  So I decided at that point in time, its time to call the security.  So I called the security.  They were there really fast, along with LA Sheriff’s deputies.  I said to the deputy, ‘Why don’t you usher these violent, boisterous muslims out of here and everything will be fine?’  He said, ‘Well we’re waiting to see what mall management wants to do’…Well, the mall manager came over and talked to me, and he said ‘Steve, we’re going to have to ask you to close up shop early today.’  I said ‘Wait a minute, I’m approved, you approved my application, and you’re asking me to leave?  You’re not going to escort those unruly muslims out of here?  Everything was fine until they started yelling and shouting and the crowd grew.’  He said, ‘No, we’re asking you to close up because they told us they have a right to be here and they will not leave until (you’re) gone.'”

That – ladies and gentlemen – is Civilization Jihad by OUR hands.  Muslims who create a public disturbance are not removed because they refuse to leave until the man saying things about Islam they do not like is removed – thus the Islamic Law of Slander is enforced in California by sworn officers of the law and mall management.  That is how Civilization Jihad works.

An article about this incident can be found on JihadWatch here.

As a reminder to our readers:  On November 4, 2010, a citizen and Marine named Randy McDaniels attended an event at the University of Central Florida hosted by the Muslim Students Association (Muslim Brotherhood) and featured speakers Jamal Badawi (Muslim Brotherhood/Hamas) and Edina Lekovic (Communications Director for the Muslim Brotherhood’s Muslim Public Affairs Council).  The muscle in the room was Hamas doing business as “CAIR” (Council on American Islamic Relations).

When McDaniels asked simple probing questions, he was warned to be quiet by a university official, and then dragged out of the room by several uniformed police officers.

A video of the event can be seen here and UTT strongly recommends readers take the time to view it (4 minutes).  An article written about the incident for Breitbart by John Guandolo can be read here.

What do these two incidents, separated by 7 years, demonstrate?

The lack of training for local law enforcement about the Islamic Movement in the United States, the Muslim Brotherhood’s network, and sharia leaves local officials wide open to being easily duped into taking actions that serve the objectives of our enemies, infringe on the liberties of Americans, and impose sharia inside the United States without ever having to go into a courtroom.

UTT encourages citizens to get involved by getting trained – especially via UTT’s Train the Trainer program – and taking actions including those encouraged by the Counter Jihad Coalition.

Boldly speak truth in love about the real threat of Islam in our society today.

Thanks to the many Patriots who do so, and especially to Steve Amundson and his team at CJC (CounterJihadCoalition.org).