On June 12, 2016, UTT published an article after the jihadi attack in Orlando, Florida making it clear the marxist/anarchist movement is working with and in support of the jihadi network, and are a threat to the Republic all on their own as well.

“The way is paved for the jihadi organizations by socialist and marxist collaborators who work daily to push law enforcement back on their heels…Everything we are witnessing now is a preparation of the battlefield by our enemy and their collaborators…imagine multiple riots similar to the events in Baltimore, Maryland, where uncontrolled thugs burn, loot, shoot, and destroy American towns.” 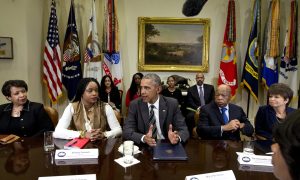 Why are they doing this and why are our leaders and the media not speaking honestly about it?  Why are leaders asking police to show “restraint” in the face of deadly attacks?

Because all of this puts law enforcement on the defensive and is a part of the Marxist revolutionary movement which helps it and its friends in the Jihadi Movement gain momentum.

As major media outlets parade “experts” out who say jihadis in Orlando, Nice, and elsewhere are not “true Muslims – contrary to the facts – so too are they portraying terrorists/anarchists from Black Lives Matter and other groups as having legitimate civil rights concerns when their stated aim is revolution, civil unrest, and the killing of law enforcement officers.

How does this fit into the larger threat to our nation?

Black Lives Matter is working hand in hand with Hamas and other jihadi/terrorist groups.

Black Lives Matter is a piece of a much larger Marxist/Socialist threat which works to weaken the society and prepare the battlefield for other enemies as well propel it’s own agenda.

Americans should see the Marxist organizations clearly for who they really are and the threat they present to the community.