Dawah: The Call to Islam is Deceptive, Dangerous and Deadly

Dawah in Islam is not “proselytizing” to others.  It is the “Call” or “Invitation” to Islam, and is a legal requirement before Muslims wage jihad against non-Muslims. 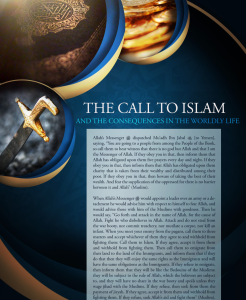 The Koran speaks of Dawah – the Call to Islam.  “We do not punish until We send a messenger.” (Koran 17:15).  Tafsir Ibn Kathir, which legally defines every verse in the Koran, states this verse means Muslims cannot punish non-Muslims until they “give a warning” to them by inviting them to Islam.  This is Dawah.

The Um Dat al Salik (Reliance of the Traveller), authoritative Islamic Sacred Law approved by the highest authority in Islamic jurisprudence (Al Azhar in Egypt), reveals “Dawah…as a condition for waging jihad against non-Muslims” can be found in Book O, Justice, o9.8, which reads:  “The caliph makes war upon Jews, Christians, and Zoroastrians provided he has first invited them to enter Islam in faith and practice, and if they will not, then invited them to enter the social order of Islam by paying the non-Muslim poll tax (jizya)…and the war continues until they become Muslim or else pay the non-Muslim poll tax in accordance with the word of Allah Most High.”

The “most perfect example of a man” in Islam is Mohammad.  “When the Muslims commence battle, and they have surrounded a city or a fort, they are to invite the inhabitants to accept Islam, due to what is related by Ibn ‘Abbas ‘that the Prophet did not commence combat with a people without first inviting them to Islam.'”  [Al-Hidayah, A Classical Manual of Hanafi Law, “The Rules of Warfare”]

First comes Dawah, then comes Jihad.  Dawah is a legal requirement in Islam before Muslims can wage war on non-Muslims.

In May of 2006, Iranian President Ahmadinejad sent a letter to President Bush and the American people inviting us all to embrace Islam and asked, “Will you not accept this invitation?”

This was a declaration of war.  Do you think leaders at the Pentagon or National Security staffs were or are aware of the Islamic Law controlling this portion of the Law of Jihad for Muslims?

In March 2010, a Muslim wrote emails to the legislatures of five (5) states including Kansas, Texas, and Missouri.  The emails read, in part:  (March 2nd) “We Muslims believe that Islam is the only true religion devised by God Almighty Allah and that God Almighty Allah is the master of the ‘Day of Judgment’ on which every individual is accountable…I humbly invite you to ‘ACCEPT ISLAM FOR YOUR SALVATION.'” (March 20) “All Non-Muslims are obstinately stubborn, arrogant in NOT accepting Islam…”  (March 21) “This is perhaps my last email to Senators, House of Representatives/Delegates/Assembly and Staff Members…I would like you to bear witness that I have delivered you the Message of Islam to the best of my ability…I urge you again and invite you to ‘ACCEPT ISLAM FOR YOUR SALVATION’!”

This was a threat to these State Legislatures and remains in effect today.  The perpetrator, Javid Kamal, was arrested in Texas on immigration related charges.  He was not arrested because officials there understood the reality nor the magnitude of the threat that was being leveled at the state legislature.

It is worth noting the latest ISIS publication of Dabiq offers “A Final Invitation” to Christians and Jews to accept Islam or face war from the Muslims. 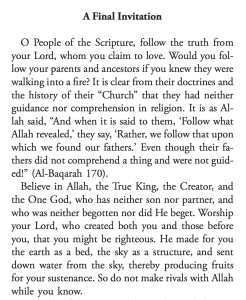 It is also worth noting that ISIS continues to accurately cite Islamic Sacred Law – which comes from the Koran and the example of the Prophet Mohammad – for their actions.

ISIS quotes and promotes the same sharia that Muslim leaders in America like those from Hamas (doing business as CAIR)  and the US Council of Muslim Organizations work so diligently to impose on non-Muslims.

The Call to Islam – DAWAH – is the warning before the sword.