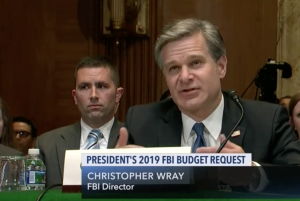 The FBI does not have the manpower nor the ability to conduct adequate investigations into this number of jihadis.

Director Wray stated there are “not many dots to connect…we are trying to look for red flags.”  This indicates the FBI is no closer to understanding the Islamic threat than it was ten years ago.

Mr. Wray’s solution to this problem is, “Outreach to the community, partnership with our state and local law enforcement who know those communities better, but it’s hard….”

The U.S. government has been outreaching to Islamic leaders for nearly 17 years and where has it left us?

Understanding the Threat (UTT) is the only organization in America providing training to police, intelligence professionals, civic leaders, and citizens about the jihadi threat and how to map out this threat in local communities.

The answer to question #1 is always a unanimous “No.”

The answer to question #2 is always a unanimous “Yes.”

A comprehensive strategy to defeat the Islamic Movement in the United States and their Marxist collaborators must be implemented immediately if we have any chance of turning this tide.

UTT and our friends have such a strategy.  It appears only the President has the courage to put such a bold strategy in place.

You can help by encouraging him to do so.