The leading edge of the Islamic Movement’s Final Stage in the United States is upon us.  The violence is now beginning in earnest. 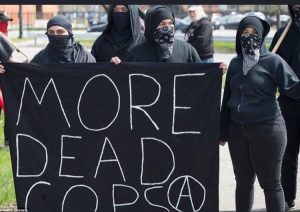 One day in the future, history will record with great astonishment how military leaders, politicians on both sides of the aisle, intelligence professionals, and others were catastrophically unprofessional for 16 years after 9/11/2001, thus putting the American people in grave peril.

Understanding the Threat’s (UTT) has trained thousands of local, state and federal officers/agents on the Islamic threat (sharia and the jihadi network in the US), the hard-left Marxist/Socialist/Communist threat, and how these Movements work together to bring down the U.S. government.

The response to UTT’s training is always the same:  (1) none of those in attendance, including FBI Joint Terrorism Task Force agents/officers, have ever heard the information presented, and (2) they all agree it is critical to protecting their communities.  See some comments here.

When UTT’s President John Guandolo was recruited out of the FBI by the Department of Defense (end of 2008) he briefed a number of 3 and 4 star generals and admirals, numerous Members of Congress, the Chairmen of the House Intelligence, Homeland Security, and Judiciary Committees, former Directors of intelligence agencies, former National Security Advisors, and others.  None of these good men and women were aware of the massive jihadi network in the United States, nor what sharia is and how it operates to drive the Global Islamic Movement.

UTT’s Chris Gaubatz’s experience (2008) undercover inside the headquarters of U.S. Hamas doing business as the Council on American Islamic Relations (CAIR) revealed “America’s largest muslim civil rights group” – as they are called – is engaged in fraud, sedition, espionage, and terrorism.  Yet CAIR and its leaders are unimpeded in their work by U.S. agencies sworn to dismantle them.

Today, the situation is significantly worse than it was nine years ago.  The enemy has gained significant ground in the war while our leaders have barely scratched the surface on understanding the danger facing the Republic.

The Muslim Brotherhood has increased their ground game:

*Insinuated Muslim Brotherhood sympathizers into Mr. Trump’s administration and utilized their network to cease efforts to designate the MB a terrorist organization – with support from Mrs. Clinton.

*Created an army of attorneys to do battle in U.S. courts to slow down judicial action by US government

*Expanded their Islamophobia campaign to bring social media giants Facebook, Twitter and others onboard to stifle free speech, specifically truthful speech about Islam.

*Broadened their cooperative efforts with hard-left Marxist organizations to directly attack those individuals and organizations speaking truth about Islam.

Now, the violent war UTT has warned about and predicted inside the United States has begun.

The Islamic Movement’s initial tool for violence in the United States is the anarchists and “domestic terrorist” hard-left Marxist/Socialist Communist organizations, including Antifa, Black Lives Matters, and dozens of groups forming together.

Many of these people and groups call for the killing of the President, as did Missouri State Senator Maria Chappelle-Nadal.

These are the Brown Shirts of the 21st century.

These two massive Movements in the United States funded by external and internal entities whose stated goal is the destruction of the United States.  They publish doctrine, websites, speeches, and books which call for the overthrow of our government, and then take actions in furtherance of these goals. 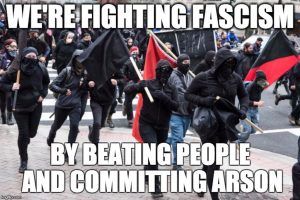 This is not only a violation of numerous federal laws, but these actions demand that all people who are in positions of authority and who have sworn an oath to the Constitution have a duty to take actions to destroy these Movements and defend our Republic.

As the violence escalates we will see social unrest like occurred in Baltimore, Ferguson, Berkley, and elsewhere. But it will be much worse.

Remember the Brown Shirts were killed on the Night of the Long Knives and Adolf Hitlers Black Shirts took charge.  So it is in history with Movements like this.

Remembering this is a war of narratives – and Information War – more than anything else, all of these escalating actions will come with a pre-planned propaganda campaign just like we saw in Charlottesville, Virginia.

Here are five things citizens are encouraged to do:

Leaders of the US Council of Muslim Organizations, the leading MB element in the US. General Masul of the Muslim Brotherhood Nihad Awad (also Hamas leader) is front row 3rd from right

For every person who becomes educated as to the true nature of the threats we face as a nation is another person who will be fully committed to defending it at a deep level.

Leave a Reply to Carl Mullan