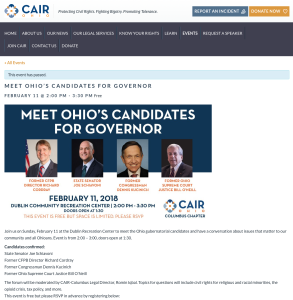 Hamas doing business as the Council on American Islamic Relations (CAIR) hosted an event in Columbus, Ohio yesterday for the Democrat candidates for Governor of that state.

Evidence in the largest terrorism financing and Hamas trial in U.S. history – US v Holy Land Foundation for Relief and Development, Dallas 2008 (“HLF”) – identifies CAIR as the 4th organization created by the U.S. Muslim Brotherhood’s Palestine Committee which is Hamas in the United States.

When CAIR tried to have its name removed from the unindicted co-conspirator list in the HLF case, the federal judge ruled, “The Government has produced ample evidence to establish the associations of CAIR, ISNA, and NAIT with the HLF, the Islamic Association for Palestine (“IAP”), and with Hamas.”

UTT’s Vice President Chris Gaubatz went undercover inside CAIR in 2008 for approximately 6 months and retrieved over 12,000 documents from CAIR’s headquarters revealing evidence of fraud, sedition, espionage, and terrorism.  Read more about this in the book detailing Chris’ exploits Muslim Mafia.

For more evidence that CAIR is Hamas click HERE.

UTT has made inquiries to the FBI’s National Press Office asking:  whether or not investigations have been opened into CAIR Columbus and its leadership; whether or not CAIR is being investigated for tampering with elections, sedition, material support for terrorism, and other charges; and if the Democrate candidates for Ohip Governor have been questioned or are being investigated for participating in the terrorist event.

Thus far UTT has not received an answer to these inquiries.