On August 21, 2016, Hamas (dba CAIR) conducted a briefing in Longwood, Florida led by Hamas leader Hassan Shibly (Director of CAIR Florida).  The briefing was focused on the “anti-Muslim network in the United States” and how to keep truthful information (“Islamophobia” according to them) from reaching local and state law enforcement. 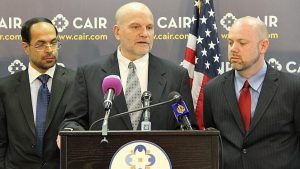 The entire presentation can be found HERE.

The Council on American Islamic Relations – aka CAIR – is a Hamas entity.  There is no factual basis to dispute this.  CAIR is Hamas and Hamas is designated a Foreign Terrorist Organization by the government of the United States and many other nations in the world.

At UTT (Understanding the Threat) we refer to CAIR as “Hamas (dba/doing business as CAIR)” because that is who they are.  They are suit-wearing jihadis and should be treated as such.

As a matter of fact, when UTT’s own Chris Gaubatz was undercover as an “intern” at Hamas (dba CAIR), one of the documents he discovered, entitled “Proposed Muslim Platform for 2004” (dated 3/08/2004) was a planning memo in which leaders of CAIR stated they would work directly with Osama bin Laden. The document stated:  “Attempt to understand Islamic movements in the area, and start supporting Islamic groups including Mr. bin Laden and his associates.”

Now that we are clear about who is giving the presentation about “Islamophobia” we can continue.

In this brief clip from the presentation in Longwood, Florida, Hamas operative Corey Saylor states John Guandolo, founder and President of UTT teaches law enforcement officers that the Director of Central Intelligence John Brennan is a “secret Muslim” and mosques have no First Amendment rights.

In fact, UTT does not mention John Brennan in its 3-day “Understanding and Investigating the Jihadi Network” which details the threats from the Global Islamic Movement to the communities in which UTT teaches.

UTT does, however, teach how Hamas (dba CAIR) and the broader Muslim Brotherhood (MB) define an “Islamic Center/Mosque” and view its role per their own documents entered into evidence in the largest terrorism financing and Hamas trial ever successfully prosecuted in American history – US v Holy Land Foundation for Relief and Development (“HLF”), Dallas 2008.

The MB defines an Islamic Center/Mosque as the place in which jihadis are housed and trained, and the place from which the jihad will be launched.  UTT, in its program then uses the Mosque Survey – which was produced by Hamas (dba CAIR) – which states that in 2010 there were 2106 Islamic Centers/Mosques in the United States.  Most of these mosques are owned/controlled by the MB and, therefore, are hostile to to the U.S. and its citizens.

In discussing HOW to respond to UTT training, Corey Saylor teaches other Hamas trainees/operatives how to “embarrass” the law enforcement hosts to shut down the program and have the continuing education credits removed.

In all of this it must be remembered that CAIR is Hamas, and this is a war.  In this case, Hamas is waging a war to bring pressure on law enforcement agencies to shut down any training that speaks truth into the threat the Global Islamic Movement poses so local and state law enforcement officers will not know the truth about the threats facing their communities.