Heroic Kansas Legislator Prepares for Next Assignment in the War

Representative Peggy Mast (76th District), the Speaker Pro Tem of the Kansas State House, is retiring after nearly 20 years of service to her state and the nation. 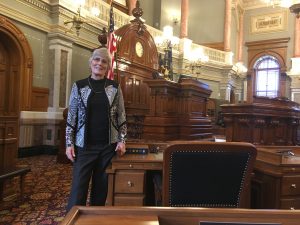 In the opinion of UTT, Representative Mast understood the threat from the Islamic Movement sooner and demonstrated boldness and tenacity on issues relating to the Islamic threat to her state and the nation longer than any other state legislator in America.

Her knowledge of the jihadi threat, and her deep understanding of sharia allowed her to see immediate dangers when no one else could.  Case in point – when a muslim sent emails to all the legislators in the Kansas state house inviting them to convert to Islam, it was Representative Mast who recognized the invitation – which occurred at three different times – was a prelude to a threat based on her knowledge of the Law of Jihad and her understanding of “dawah” in Islam, per sharia.  She was able to alert security officials who uncovered the fact the individual sending the threat had done the same toward four other state legislatures.

As the result of her efforts, the FBI arrested the individual averting what may have been a deadly situation.

Consistently, Representative Mast held hearings in state committees, pushed for education and training in her state for law enforcement and others, and pushed for relevant legislation, including leading the charge to successfully get American Laws for American Courts (ALAC) passed in Kansas.

She was often met with derision and contempt from political opponents, the media, and even some cowards in her own party.  Yet, she marched on.

UTT had an opportunity to sit down with Peggy Mast and interview her about a few of her experiences along the way.  Stories of lying Muslim Brotherhood leaders (Turquoise Foundation), poorly informed military personnel, and hostile media are all a part of the story.

UTT salutes this American hero who will certainly remain on the front lines of this war for a long time to come.