While Muslim leaders and apologists continue to publicly tell the media and others Islam does not sanction honor killings, the truth is, Islam does.

The most common rebuttal heard from Muslims in the media is that the term “honor killing” is not found in the Koran nor any hadith (records of the actions and sayings of Islam’s prophet Mohammad). 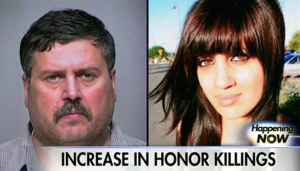 The phrase “honor killing” won’t be found in the Koran nor in any Sunnah of the Islamic prophet Mohammad.  The authority for a parent to kill their children or grandchildren for any reason they see fit, however, is found in the sharia (Islamic law), and does come from the Koran and Sunnah of Mohammad.

The Reliance of the Traveller, authoritative Islamic sharia certified by Al-Azhar in Egypt – the highest authority of Islamic jurisprudence on the planet- and the Muslim Brotherhood’s Fiqh Council of North America, states:  “retaliation is obligatory against anyone who kills a human being purely intentionally and without right.”  It goes on to say those “not subject to retaliation” includes “a father or mother (or their fathers or mothers) for killing their offspring, or offspring’s offspring.” (‘Umdat al-Salik, Book O Justice, o1.1-2).

This means, in Islam it is okay for a mother and/or father to kill their children or grandchildren with no legal consequences.

This is done when children or family members “dishonor” the family, thus it is called an “honor killing.”

So, even though “honor killing” is not found in the Koran or Sunnah, the authority to do it is.

Some examples in the United States include:

In April 2004 a Turkish Muslim killed his four year old daughter in Scottsville, New York because she was “sullied” by a gynecological exam.

In 2006 a Somali Muslim in Kentucky brutally killed his four children and raped his wife because he suspected her of infidelity.

In January 2008 an Egyptian Muslim shot and killed his two daughters in Irving, Texas.  The girls great aunt told reporters they were “honor killings.”

In July 2008, a Pakistani Muslim in Atlanta, Georgia killed his daughter because she did not want to go through with an arranged marriage.

In October 2009, an Iraqi Muslim from Arizona drove over his daughter for being too Westernized.  She died two weeks later and he was convicted of her murder.

In October 2009, a Muslim woman in New Brighton, New York tried to kill her husband by slitting his throat because he was not “muslim enough.”

The Department of Justice reports there are approximately 27 honor killings in the U.S. each year.

Pakistani Muslim Muzzimmil Hassan founded Bridges TV in Buffalo, New York as the first Muslim American network broadcasting in English.  Bridges TV was established to counter negative stereotypes of Muslim.  Muzzimmil Hassan (a close friend of Nihad Awad of CAIR) personally demonstrated his “moderation” by sawing his wife’s head off.  In March of 2011, Hassan was sentenced to 25 years in prison for this heinous crime.

All lawful under sharia.