How Does Sharia Define “Jihad”?

Since 9/11, Presidents, Members of Congress, the media, and many others have publicly stated that individuals who commit acts of violence in the name of Islam are acting as “criminals” or “thugs” but certainly are not doing what Islam teaches because “no religion would teach that.”

The vehicle to do this is called “jihad.”

Because sharia is a totalitarian system of law, we must look at how sharia defines “jihad.” 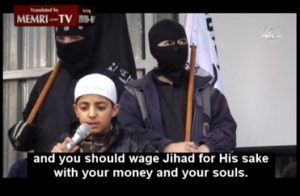 The Umdat al Salik (Reliance of the Traveller) is a 14th century book of Islamic law that is relevant today because the leading Muslim Brotherhood entity in the United States, the Islamic Society of North America, tells Muslims this book should be in every Muslim home in America.  Additionally, Al Azhar University, the oldest and most prestigious school of Islamic jurisprudence on the planet has a certification in the Reliance of the Traveller stating it approves what is contained inside it.

There, jihad is defined as follows:  “to war against non-Muslims…signifying warfare to establish Islam” and is “obligatory for every Muslim.”  There is no other definition for jihad.

The 12th century Distinguished Jurist’s Primer states:  “war…is obligatory on men who are free, have attained puberty, who find the means for going to war, are of sound health, and are neither ill nor suffer from a chronic disease…the jurists agreed, with respect to the people who are to be fought, that they are all of the polytheists, because of the words of the Exalted, ‘And fight them until persecution is no more, and religion is all for Allah.”

The Al-Hidayah: A Classic Manual of Hanafi Law defines jihad as follows:  “Jihad is a communal obligation…Jihad is determined till the Day of Judgment…’Then shall ye fight, or they shall submit (Qur’an 48:16)’ When the Muslims commence battle, and they have surrounded a city or a fort, they are to invite the inhabitants to accept Islam…If they respond positively, they are to refrain from fighting them, due to the attainment of the purpose. If they refuse, they are to invite them to the payment of jizyah, and this is what the Prophet ordered the commanders of the armies to do for it is one of the consequences
upon the conclusion of battle…if they reject the invitation, they are to seek the help of Allah and engage them in combat.”

From the most widely used text in Islamic schools in America, What Islam is All About, we see American Muslim school children are taught this:  “The word jihad is most often associated with the act of physically confronting evil and wrong-doing…if anyone dies in a Jihad they automatically go to Paradise.  A Shaheed or Martyr, is described this way by Allah, ‘Don’t think that those who were killed in Allah’s Cause are dead. No they are alive, finding their bounty in the presence of their Lord…the Law of the Land is the Sharia of
Allah…the duty of the Muslim citizen is to be loyal to the Islamic State.” 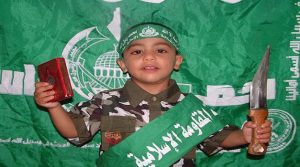 It is worth noting that all authoritative Islamic law only defines jihad as warfare against non-Muslims until they either convert to Islam or – in the case of those who had a holy book at the time of Mohammad (Jews, Christians, Zoroastrians) – submit to sharia, pay the non-Muslim poll tax (jizya), and “feel themselves subdued.”

There is no other “version” of Islam which contradicts this.

It is interesting to note that nearly fifteen (15) years after 9/11, Western leaders continue see jihad being committed right in front of their faces, and still continue to say that it does not represent “true Islam.”  Yet, at Islamic schools across the globe, first grade Muslim children are taught that non-Muslims must convert to Islam, submit to sharia, or be killed for the sake of Allah.

Where on the planet does authoritative sharia teach Muslims that jihad is spiritual yoga to better oneself?  It does not teach this anywhere.  However, Muslim “advisors” do tell American officials this definition exists even though it is not taught to the Muslim community.

So the next time you see a Muslim kill or attempt to kill someone and they proclaim it is a command from Allah, you will realize that person is not a “radical” or a “violent extremist” – that person is a Jihadi.