One of the facets of sharia (Islamic Law) that turns the light bulb on in people’s minds more than anything else seems to be the moment they grasp the Koranic concept of abrogation and progressive revelation.

According to Islam, the original Law of Moses and revelations given to Jesus were corrupted by the Jews and Christian Priests and, therefore, do not exist on the planet today in their “original” form.  In other words, Islam teaches that all Bibles in the world today are corrupt because the fore-tellings of Mohammad were all intentionally removed.

According to Islam, the message of the Koran was revealed to Mohammad via an angel over a period of approximately 23 years – progressively over time.

The Koran is organized into 114 chapters called “Suras.”  These suras are not organize chronologically, but generally by size of the chapter from largest to smallest with the exception of Sura 1 which is only several lines long.

Three times in the Koran (2:106, 16:101, 17:106) Allah says that whatever he reveals chronologically later abrogates (overrules or cancels) what he previously revealed.  Allah commands Mohammad to bring the community of people from their unbelief to full compliance with sharia progressively in stages.  This is exactly what we are seeing on the ground today across the world.  The Muslim community is slowly moving from living however they want to live to living in communities that are adhering to the sharia to a greater and greater degree.

According to Islam, Mohammad first received revelations in Mecca for a period of thirteen (13) years.  He was completely rejected as a “prophet” by the religious scholars (Jewish, Christian) of the time.  During those years only approximately 200 people converted to Islam – in 13 years.  This is the time of “tolerance” where Mohammad had to tolerate the non-Muslims and there were no revelations of jihad.

Then Mohammad made the hijra to Medina, and was called to become a political and military leader. There he raised an army and gained many converts to Islam as he began to get revelations of jihad.  First Mohammad received revelations of defensive jihad, then limited offensive jihad, and finally, the command to wage jihad as a permanent obligation until the entire world is under sharia.

Allah said it last (chronologically) in the Koran, then Mohammad said it, and then Mohammad did it.  This is why there is no gray area in sharia as to the permanent command for all Muslims to wage jihad until the entire world is under sharia when they have the strength and ability to do so.

The Law of Jihad provides for how jihad can be waged by Muslims depending on where they are and their abilities.

Bringing greater sharia adherence to the world via jihad is the Muslim Brotherhood’s entire focus of all they do, and the stated objective of all of the jihadi organizations on the planet.

Therefore, it is logical, when seen from the perspective of Islam, that if the Koran abrogated all that came before it Allah would say “Whoever accepts a religion other than Islam will never have it accepted of him and he will be of those who truly fail in the hereafter (go to hell).” (Koran 3:85)

This logically leads to the requirement of the Koran for Muslims to never take Jews and Christians as friends (Koran 5:51), for pagans to be given the option to convert or be killed (Koran 9:5), and for the “People of the Book” (Jews, Christians, and Zoroastrians) to be given the option – if they choose not to convert to Islam and do not want to be killed – to submit to Islam under sharia, pay the non-Muslim poll tax (jizya), and “feel themselves subdued.” (Koran 9:29)

Islamic scholars have come to an agreement on the chronological order of the suras.  While there are slight differences in some of the listings, Sura 5 is always the last sura (chronologically) to discuss relations between Muslims and non-Muslims, and Sura 9 is the last to discuss jihad.  These are the last words from Allah on these issues, and Islam teaches they abrogate all that came before them. 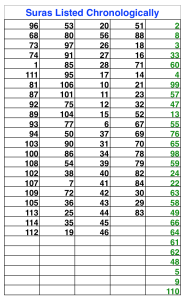 Individuals who convert into Islam are also taught Islam progressively and not all at once.  The Muslim Brotherhood’s “How To” manual entitled Methodology of Dawah Ilallah in American Perspective has this to say about converting a non-Muslim to Islam:

“Some rituals of religion and traditions of the Muslim Community are explained.  A short account of the Prophet’s (PBUH) life is presented, without the revolutionary aspect.  When Islam is acceptable to the new entrants in this concocted or abbreviated form, the ceremony of Shahadah is performed with great reverence.  A non-Muslim thus becomes a Muslim, obedient to Allah (SWT) alone.  The revolutionary aspect of Islam is rarely brought before the new converts, as in most cases the Da’ee (the one bringing the non-Muslim to Islam) himself is not conversant with it.”

When individuals or communities come to Islam, it is done progressively and in stages.  Unlike when people join into other groups, Muslim do not tell new converts the whole story.  They bring it to them over time.  Mohammad had 23 years to bring people from where they were to full obedience to Allah.

This progression over time from little sharia adherence to full sharia adherence is the mirror of Mohammad receiving the revelations of the Koran progressively and moving the Muslim community towards complete obedience to Allah and his law – sharia.

The focus is on the Muslim community first, as we see the military jihadi organizations like ISIS and Al Qaeda doing today.  They are forcing Islamic nations to adhere to sharia.

Soon we will see, and are seeing, the HIJRA into non-Muslim lands – also known as the “refugee” surge into Europe and the United States.  Finally, we will see the call for all non-Muslims to convert to Islam, submit to Islam or be killed.  While some of this is beginning to happen, when the Global Islamic Movement assesses Muslim lands are sharia compliant, they will focus their attention on the West.

All of this is the mirror image of the progressive revelation of Islam as revealed to the world over history, and specifically to Mohammad during the 23 years he received the Koran from Allah.

We are all watching it practically play out today in real time, and this is something the suit-wearing jihadis in America are not telling our leaders.

Leave a Reply to JeremyR