In Light of Jeremiah Wright’s Comments UTT Asks: Was Jesus a Muslim?

In Light of Jeremiah Wright’s Comments UTT Asks: Was Jesus a Muslim?

Saturday at the Nation of Islam event titled “Justice or Else!” President Obama’s pastor Jeremiah Wright stated Jesus was a “Palestinian.”  This is historically untrue, but it opens up a door for a deeper discussion.

In light of a nationwide push by Muslim Brotherhood organizations to propagate the message that Jesus of Nazareth was a Muslim, it is time to bring some much needed light onto this subject. 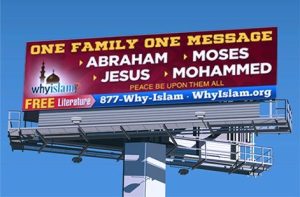 This billboard, and many like it, are funded and sponsored by groups such as ICNA (Islamic Circle of North America) which is a leading jihadi organization in North America and a driving force in Interfaith Outreach here.

Since Islamic jihadis attacked the United States on 9/11/2001, the U.S. Muslim Brotherhood has led a large-scale information operation (“propaganda campaign” if you prefer) to convince Americans – especially religious leaders – Islam is a one degree off from Christianity and Judaism.  Almost the same really.

We are told by leading Muslim scholars in America (who just happen to be members of the Muslim Brotherhood), there is “One God” and “Three Abrahamic Faiths” – Christianity, Judaism, and Islam.  We are also told “Muslims respect Jesus too.”  The first is a lie according to Islamic doctrine.  The second is true if you understand Islam through the lens of Islam.

Islam defines itself as a “complete way of life governed by Sharia (Islamic Law).”  Sharia comes from the Quran and the Sunnah (the way of the Prophet Mohammad).

The Quran can only be understood if “Abrogation” is understood.  The Quranic concept of Abrogation comes from Quaran 16:101 and 2:106, and is understood by all Sunni Islamic scholars to mean that whatever comes chronologically last in the Quran overrules what comes before it.

It should be noted that all Islamic scholars agree Sura (Chapter) 9 of the Quran is the last (chronologically) to discuss Jihad, and Sura 5 is the last to discuss relations between Muslims and non-Muslims.

An example:  the Quran says “Let there be no compulsion in religion” (Quran 2:256).  However, that is abrogated when Allah says all people who do not convert to Islam will go to hell (Quran 3:85), which is why Muslims are commanded never to take Jews and Christians for their friends (Quran 5:51).  Therefore, Muslims are commanded to “Fight and slay the unbelievers wherever you find them and lie in wait for them in every strategem of war.” (Quran 9:5)  In addition to converting to Islam or being killed, people of the book (Jews, Christians, and Zoroastians) get the third option of submitting to Islam, paying the non-Muslim poll tax (jizya), and living under Sharia with lesser rights than Muslims. (Quran 9:29)

In Islam, Mohammad is considered the al Insan al Kamil – the perfect example for all Muslims to follow. His sayings, actions, and example are codified in authoritative Hadith and in the Sira (biographies of Mohammad).  The most authoritative Hadith scholar is Bukhari.  This is critical to understanding Islam and how Muslims relate to the world.

The reason it is okay for a 60 year old Lebanese Muslim man to marry an 8 year old girl, is because Mohammad married a 6 year old and consummated the relationship when she was only 9.  The reason Muslims wage war on non-Muslims until Islam rules the world is because Allah commanded it (9:5 et al), Mohammad repeated this command as related by Bukhari, and then Mohammad waged war on non-Muslims and made them convert, submit, or die.  This is why there is no disagreement among the scholars on these matters.

How can the God of the Bible who calls us to love one another (Leviticus 19:18 and John 15:12) be the same God (Allah) who calls Muslims to “Fight them (non-Muslims), and Allah will punish them by your hands, cover them with shame, help you (to victory) over them.” (Quran 9:14)

Allah will “punish” non-Muslims through the hands of the Muslims.  This verse (9:14) creates a requirement for Muslims to punish non-Muslims.

Is Jesus a Muslim?

As seen through the eyes of Islam, Abraham, Moses, Jesus, and others are Muslim prophets.  How can that be?  We must first begin by understanding Islam teaches that no authentic Torahs, Old Testaments, or New Testaments exist on the planet today.

Islam teaches that corrupt Jews and Christian priests changed the original Old and New Testaments which, according to Islam, predicted the coming of Mohammed.

“And if only they upheld [the law of] the Torah, the Gospel, and what has been revealed to them from their Lord, they would have consumed provision from above them and from beneath their feet. Among them are a moderate community, but many of them – evil is that which they do.” (Quran 5:66)

Historical accounts, biblical manuscripts, the Dead Sea Scrolls, archeology, and other tangible sources of evidence be damned.  This is what Islam teaches.

Can the Jesus who said to his followers “I am the way and the truth and the life. No one comes to the Father except through me” (John 14:6) be the same guy about whom this is said:  “Allah’s Apostle said, ‘By Him in Whose Hands my soul is, son of Mary (Jesus) will shortly descend amongst you people (Muslims) as a just ruler and will break the Cross and kill the pig and abolish the Jizya. Then there will be abundance of money and nobody will accept charitable gifts.” (Sahih Bukhari Volume 3, Book 34, Number 425)

No one comes to our Father in heaven except through Jesus OR will Jesus return to cast all Christians into hell for not converting and kill the Jews (pigs)?  It cannot be both.

Can it be true that Jesus and the Father are one (John 10:30 and 14:9), the Holy Spirit guides his disciples since Jesus ascended to heaven, and can disciples of Jesus say the Apostles Creed with integrity while this is true:  “They do blaspheme who say: Allah is one of three in a Trinity: for there is no god except One Allah. If they desist not from their word (of blasphemy), verily a grievous penalty will befall the blasphemers among them.” (Quran 5:73)

Jesus was either the Messiah and the Son of God who was crucified, died, resurrected and ascended as Christians teach and believe or he is merely a prophet as Islam believes.  It is one or the other.  He cannot simply be a “nice” guy.  Jesus himself claimed to be the Son of God and the Son of Man.  If that is not true he was a liar.

This is not a theological debate.  This is a discussion of logic and reason.  These two worlds are completely incompatible with one another in the realm of Logic 101.

Christians believe God is the Father, the Son Jesus, and the Holy Spirit.  One God, three persons in a heroic fellowship into which mankind was invited to participate relationally.  God promises his inheritance and his Kingdom to his children whom he loves because he created them in his image.  Jesus gave all who believe in him all the authority his Father in heaven gave him to continue his work (John 14:12, Mark 16:17-18), and lifted all believers, spiritually, to sit with him at the Father’s right hand in heaven when he ascended.

From a rational, reasonable, and logical perspective, there is a difference here between love and hate – good and evil.

Islam is not a one-off of Christianity.  It sits in direct opposition to it.