The “Joint Comprehensive Plan”(JCP) – also known as the “Iran Deal” among many – is dangerous for America’s security and demonstrates a true disconnect from reality by those who work towards it’s implementation.

Disconnected from Reality
In section (ii) of the Preamble, the JCP states: “The full implementation of this JCPOA will ensure the exclusively peaceful nature of Iran’s nuclear programme.”

Since 1979, Iran has called for the destruction of America and Israel. We need not look any further than the Iranian Constitution for all we need to know – as if the constant barrage of “Death to America” for the last 35 years isn’t enough.

In the first substantive paragraph after the “Preamble,” the Iranian Constitution reads:

“THE VANGUARD OF THE MOVEMENT
Imam Khomeini’s crushing protest against that American plot, The White Revolution, which was a step taken with a view to strengthening the foundations of the despotic regime and consolidating Iran’s political, cultural and economic links with World Imperialism, was the motive force behind the united uprising of the nation.”

Enshrined in Iran’s Constitution is hatred for America. This has not been amended by the way.  Later in the Iranian Constitution we read:

“THE RELIGIOUS ARMY
In the organization and equipping of the countries defense forces, there must be regard for faith and religion as their basis and rules. And so the Islamic Republic’s army, and the corps of Revolutionary Guards must be organized in accordance with this aim. They have responsibility not only for the safeguarding of the frontiers, but also for a religious mission, which is Holy War (JIHAD) along the way of God, and the struggle to extend the supremacy of God’s Law in the world.”

‘Against them make ready your strength to the utmost of your power, including steeds of war, to strike terror into the hearts of the enemies of God and your enemies, and others beside.’ (Quran 8:60)”

Only a few months ago, Iranian Supreme Leader Ayatollah Ali Khamenei spoke to a crowd of his people while they shouted “Death to America.”  He agreed with them saying America was the cause of the pressure on Iran today.

The photo below depicts Khamenei receiving a kiss on his sleeve from Hizbollah leader Hassan Nasrallah, a sign of respect and subservience in Shia Islam.  This is who our government thinks we can trust?  FYI, Hizbollah is designated terrorist organization. 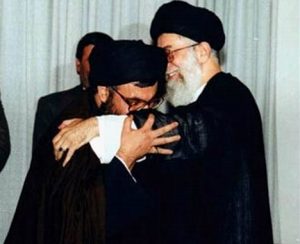 Do our leaders actually believe Iran is working and will work in “good faith” to only use nuclear power for the cause of good when it openly states the nation exists to extend the rule of Islam across the planet and openly embraces known terrorist leaders?

Besides the obvious dangers previously stated, there are many other key areas that must be highlighted in the JCP which are foolhardy and dangerous including:
(1) the lifting of economic sanctions which will provide Iran with billions of dollars for their global jihad; (2) lifting of sanctions on individuals identified as associated with the nuclear program including Qassem Suleimani, the leader of Iran’s Revolutionary Guard Quds Force.  If anyone should not have more free room to move, it is this guy.

The JCP goes on to remove all sanctions on equipment for aircraft and other mechanical/technical gear, as well as petroleum and related products.

Additionally, the international cabal behind the JCP also makes clear that American states and locales better not try to protect itself by meddling in this process:

The United States government is giving Iran – a nation which has clearly and openly declared its commitment to global jihad in it’s Constitution and elsewhere – a free pass to billions of dollars, open trade to prepare itself for the coming war, and all it needs to get the nuclear weapons it longs for.

Can this not be called “Treason”?