Is John Bolton the Man Who Will Dismantle the Islamic & Marxist Counter-States in America?

Is John Bolton the Man Who Will Dismantle the Islamic & Marxist Counter-States in America? 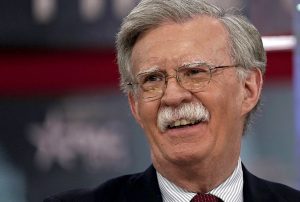 How can an American citizen know Ambassador John Bolton, President Trump’s new National Security Advisor, is a good choice for the position?

Because the Marxists are losing their minds.

In fact, John Bolton brings to the table an understanding of a wide variety of threats with strategies to take the fight to the enemy.

UTT’s President John Guandolo interviewed colleagues Philip Haney and Trevor Loudon to weigh in on this issue while the three men spoke together at a panel discussion this past weekend at the Western Conservative Summit in Phoenix, Arizona.

The topic was the Islamic and Marxist Threats.

Former founding member of the Department of Homeland Security, author, Whistleblower and one of the most knowledgable men about the Islamic Movement in the United States, Philip Haney, had this to say about Mr. Bolton:

“I’ve always been a great admirer of Bolton, and I think it’s one of the best choices President Trump has made for his cabinet so far.  He has always stood up for our sovereignty, our Constitutional values, and defended us against great opposition.  He’s outspoken, or I should say, plain-spoken.  People know exactly what he thinks, and he doesn’t equivocate.  He just tells it like it is.  I admire that.  We need some more of that.”

“I think we would all agree Americans put a high value on honesty.  (Mr. Bolton) is always honest.  Foreign leaders know exactly where he stands.  I am very pleased…(with) the appointment of Bolton.”

Responding to the question, “If you could give Mr. Bolton one piece of advice, what would it be?” Mr. Haney replied:

“Focus on the Muslim Brotherhood and start with the domestic arena, but also its connection to the foreign in places like Egypt.  We need to look at the Muslim Brotherhood and get these front groups designated and shut down.  They’re connected to Hamas – that’s been proven.  It is not a theory.  We know it and they have been operating in our face for ten years.  Its time we put an end to that.”

[To get a copy of Philip Haney’s book See Something Say Nothing click here.]

One of America’s greatest resources for information on the Marxist penetration of our government and society is New Zealand native Trevor Loudon.  His movie The Enemies Within tells the tale of the devastating penetration of the American government by avowed Marxists as well as jihadists.

“I’m very very pleased that this is the decision.  I think John Bolton is one of the most knowledgeable and hardcore American Patriots out there.  He understands national security like no one else.  He understands both the external threats and the internal threats, and has no illusions that America has enemies that need to be dealt very, very forcefully.  So I think he’s a perfect choice for President Trump at this time.  I think he will not only confront America’s external enemies, I think he’s a great force for draining the swamp.  I think he will be firing a bunch of people that need to be fired, and I don’t think he’ll take any prisoners.  So, I think that was an inspired choice by President Trump.”

In response to the question “Do you think Mr. Bolton has a good understanding of the Marxist threat in America?” Trevor responded:

“Yeah, I do.  I think he has more understanding than most.  He understands both the threats of countries like Russia and China, but he also understands very much the threat from Islam, the Muslim Brotherhood, and organizations like that.  I don’t think he has any illusions.  I think people in Tehran, Moscow and Beijing will be very, very concerned about this choice, and we should be happy about that.”

Responding to the question, “If you could give Mr. Bolton one piece of advice, what would it be?” Mr. Loudon replied:

“Drain the swamp. Get rid of the bad elements in the State Department and the national security apparatus, stop those leaks.  Deal with the internal enemies first…then you can confront the external enemies.”