ISIS, The Koran, and The Hudud

ISIS crucifies Christians, kills apostates (those who leave Islam), and amputates the hands of those who steal.

How do they justify such barbaric behavior?

These cruel punishments are commands from allah in the Koran. 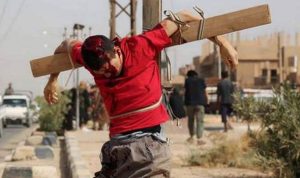 The Hudud is a part of sharia (Islamic Law), and contains the seven (7) crimes specifically listed in the Koran along with their punishments.  If it is in the Koran, according to Islam, it is the word of allah as revealed to Mohammad.

Punishments for hudud crimes are fixed and, therefore, cannot be altered by an Islamic judge’s ruling.

Four of the seven offenses are punishable by death.  They include fornication, adultery, armed robbery, and rebellion. 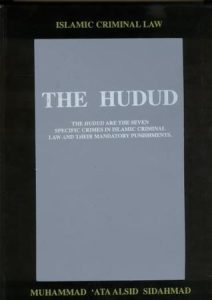 For instance, for armed robbery Koran 5:33 states:  “The punishment of those who wage war against Allah and his messenger, and strive with might and main for mischief through the land is execution, or crucifixion, or the cutting off of hands and feet from opposite sides, or exile from the land.”

The other hudud crimes include punishments for:  fornication (sex outside of marriage) for which Koran 24:2 prescribes “The woman and the man guilty for fornication flog each of them with a hundred lashes: let not compassion move you in their case in a matter prescribed by Allah”; false accusation of sexual intercourse; drinking intoxicants; and theft.

On September 24, 2014, an open letter to the leader of ISIS Abu Bakr al-Baghdadi signed by 126 Islamic leaders, including senior scholars across the globe, was published.

The letter stated:  “Hudud punishments are fixed in the Qur’an and Hadith and are unquestionably obligatory in Islamic Law.”

The signatories included leaders of prominent U.S. Islamic organizations including:  the Council on American Islamic Relations (CAIR) also known as Hamas; the Fiqh Council of North America; the North American Imams Federation; and others.

Its in the Koran, which means allah said it.  U.S. Islamic leaders condone it.  ISIS does it.

What is all the fuss about?