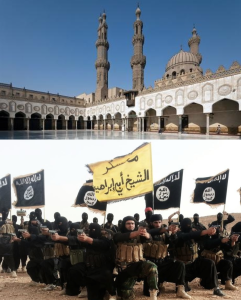 The oldest and most prestigious school of Islamic jurisprudence is Al Azhar University, founded in Egypt in approximately 970 AD.

Al Azhar and its leadership continue to affirm “Jihad,” which it defines as war-fighting against unbelievers (non-Muslims), is obligatory until the world is under Islamic rule.

Oddly enough, this is exactly what Al Qaeda, ISIS, the Muslim Brotherhood, and all of the other jihadi organizations in the world teach, and what is taught in Islamic elementary schools around the world, including the United States.

For a sneak peak of the upcoming UTT video series from Episode I dealing with this issue, click HERE.