Western leaders’ continued assault on free speech is reaching new lows.  Recently free speech has been met with arrests in Europe, and, in America, calls for an end to “anti-Muslim bigotry.” 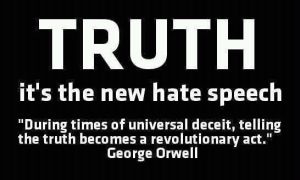 Last week a man in Scotland was arrested for a Facebook post disparaging Muslim refugees in Scotland.

This week a Dutch man was arrested for wearing a pig hat because it was deemed by police as being potentially insulting to Muslims (who were no where around).

At the same time, Catholic Bishop Robert McElroy of San Diego joined suit-wearing jihadi Sayyid Syeed of the Islamic Society of North America (ISNA) to call on Catholics to take an active role in combating “the scourge of anti-Islamic prejudice.”

According to evidence in the largest terrorism financing and Hamas trial ever successfully prosecuted in American history (US v HLF, Dallas, 2008), and Memorandums profferred by the Department of Justice, ISNA is the leading Muslim Brotherhood organization on the continent and directly funded Hamas, a designated terrorist organization.  Sayyid Syeed is a senior Director of ISNA.

Bishop McElroy also stated that U.S. Catholics should view with repugnance the “repeated falsehoods” that Islam is inherently violent, despite the fact that 100% of Islamic Law supports jihad until the entire world is under Islamic rule, and Mohammad (the “perfect man” according to Islam) himself killed and conquered non-Muslims.  All of this is taught to elementary school students in Islamic schools around the world.

The Bishop – whether he knows it or not – is imposing the Islamic Law of Slander on his flock.

In sharia, the standard for the Islamic Law of Slander is to say (speak, write, etc) anything about Muslims or Islam they would “dislike.”  It is a capital crime.

Many non-Muslims around the world have been slain by Muslims because they have “slandered” Islam or the prophet.

It should also be noted that Bishop McElroy is not on record calling for Muslims to stop killing hundreds of thousands of non-Muslims across the globe.

As has been previously documented by UTT, UTT, its founder John Guandolo, and others have been targeted by both the suit-wearing jihadists as well as progressive left organizations (SPLC for example) for speaking truth about the real threat of the global Islamic Movement.

From the Battle of Tours in 732 A.D. – when Charles Martel saved Western Civilization – to the Gates of Vienna on September 11, 1683, which again saved the West from the Muslim hordes, this enemy has only been defeated on the field of battle.

The next war in this long line of wars perpetrated by Islam is upon us.

Instead of demonstrating courage and resolve to defend all that is good, Western leaders continue to surrender to this barbaric enemy and endanger good and innocent people.

Is it right and just to sit idly by while the light of freedom is extinguished?