From the beginning of the attack on Wednesday in San Bernadino (CA) UTT called it jihad.  The modus operandi was very similar to Paris in several ways (gear, vehicle, calm demeanor of the assailants, well-planned attack, and Muslim perpetrators).

We knew from early on in the day the perpetrators were Muslim because many hours after two of the suspects were shot dead, no one in the media would tell us the most basic details about them except their gender.  Major clue #1. 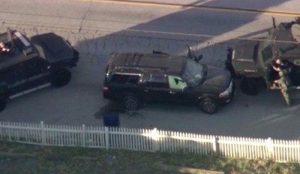 Fox news analysis included the likely option that “mental illness” was the cause.  The LA Times blamed the “incident” on a dispute between the “shooters” and others at the Christmas party at the Inland Regional Center where the shootings took place.  Other media outlets simply called it “workplace violence.”  All day long viewers were subject to analysts, newscasters, and guests who were free of any clue of what was happening before their very eyes.

The blathering incoherence was stunning.

The FBI gave us no deeper insight into the attack eight hours after it began.  How long does it take to look at the jihadi and tell he is a jihadi?  Since the FBI has zero training for agents about what Sharia adherent Muslim jihadis look like, maybe it was simple ignorance.  Maybe the allah u akbar was not enough of a clue.

The jihadis identified by 1:30 AM EST Thursday are Syed Rizwan Farook (killed by police), his brother, whose true name is still not confirmed, and Tashfeen Malik, a female who was killed by police in the vehicle along with Farook.

In advance of the substantive press conference by authorities, Fox News gave Hamas (doing business as the Council on American Islamic Relations or CAIR) the opportunity to set their narrative before facts could get in the way.  At their press conference, Hamas (CAIR) made the family of the jihadis out to be the victims, and told us we really cannot know the motive of the attackers.  Maybe it really was mental illness.

Fox News – once again – allowed the jihadis to promote their agenda on national television.  Between the O’Reilly show providing Hamas years of airtime to execute their propaganda operation, and Fox News in general supporting Hamas terrorists from CAIR, the enemy does not need to do much social media highlight its efforts. That is being done for them by Fox. 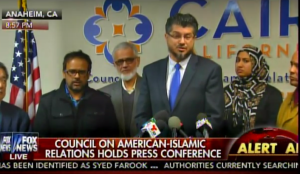 Present at the CAIR press conference was California Hamas (CAIR, Los Angeles) leader Hussam Ayloush with one of the most senior Muslim Brotherhood leaders in North America – Muzammil Siddiqi – standing behind him. Next to Siddiqi was Farhan Khan who is married to Farook’s sister Tatiana.  While Khan and Farook’s social media pages make it clear the two were close, Khan claimed he was “shocked” Syed would ever do such a thing as kill people.  Same old lies every time.

Khan is also a jihadi and had advance knowledge of this event.  Bet the bank on that. 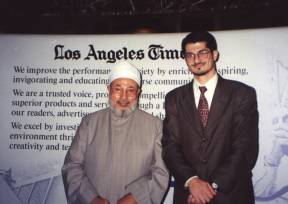 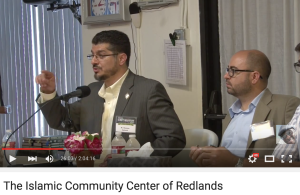 For several years, UTT has written, briefed, and consulted with leaders about the threat of the Global Islamic Movement’s network in the United States.  Specifically, UTT has made it clear that as each day passes without aggressive action taken by U.S. law enforcement to destroy the jihadi network in the United States, we reduce the number of options we have to deal with this threat.

Five years ago, we had a wide variety of options and strategies to dismantle the Muslim Brotherhood’s Movement here.  As time rolls on, we are backed into a corner and leave ourselves facing the reality that only significant force will extricate this cancer from American society.  And a grave cancer it is.

The first steps which must be taken, after a factual nature of the threat is shared with the American people, must be:  to declare the MB a Foreign Terrorist Organization (FTO); arrest the top 150-200 of the MB leaders; shut down their key 2000 organizations here; seize their assets; and charge government leaders who are aiding and abetting them with appropriate violations of federal code, including treason.

It would be appropriate to start with the President of the United States and his previous Attorney General.

Since they were the next target of investigation after the prosecution of the Holy Land Foundation in 2008, lets first prosecute CAIR and all of its leaders nationwide, because, after all, they are terrorists.

Hamas is a designated Foreign Terrorist Organization after all.

Republican Presidential candidates responded by asking for prayers for the victims of this attack.

President Obama and Hillary Clinton responded to the attack in San Bernadino by calling for more gun control.

Leave a Reply to Dorothy Cutter