Jihadi Training Camps Have Been in America for 40 Years

Jihadi Training Camps Have Been in America for 40 Years

The discovery of a “terrorist training camp” in New Mexico run by Siraj Wahhaj Jr., whose father was a character witness for the Blind Sheikh and an unindicted co-conspirator in the 1993 World Trade Center bombing, should not come as a surprise to anyone.

In response to a question, al Noman tells the audience the Muslim Brotherhood has weapons training camps in the United States.

“If the asking brother is from Jordan, for instance, he would know that it is not possible to have military training in Jordan, for instance, while here in America, there is weapons training in many of the Ikhwan’s (Muslim Brotherhood) camps…in Oklahoma they started to be strict about letting Muslims use the camps.  They would ask them, for instance, to submit their name and they would ask you to bring an ID or something to prove your name…the police came asking each person to show his ID or even his visa. These harassments exist then in the state of Oklahoma…In some of the regions when they go to a camp, they take two things, they would request a camp which has a range, a shooting range and one which has a range to shoot, one which has a range which they use for shooting.”

For the full transcript of Zeid al Noman’s discussion with Muslim Brothers in Missouri in 1981 click here.

Jamaat al Fuqra is a terrorist organization based in Pakistan, which also has at least two dozen jihadi training camps in the United States.  In the U.S. Jamaat al Fuqra is known as “Muslims of America” and is headquartered in Hancock, New York.

The mission of Jamaat al Fuqra, per its founder Sheikh Mubarak Gilani, is to “purify Islam through violence.”

In the United States Muslims of America have been responsible for bombings, assassinations, and other acts of terrorism. 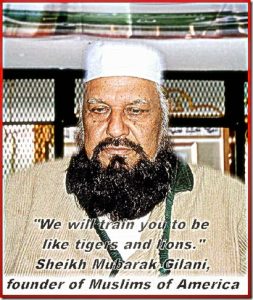 In 1991, Colorado officials were forced to put a task force together to raid a Jamaat al Fuqra terrorist camp in Buena Vista (CO) because the FBI refused to get involved.  When the compound and other locations were raided, officials found weapons, explosives, assassination lists, and evidence that military installations in Colorado and Wyoming were under pre-attack surveillance. 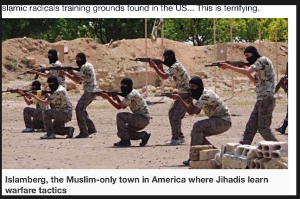 See the video on this incident here.

These camps will not  be shut down by the FBI, but by diligent and educated local police and sheriff’s offices who understand the threat and decide to protect their communities.

UTT stands ready to train police to understand the threat and dismantle these networks at the local level.