The Muslim Brotherhood in America rarely does things willy nilly.  The case of the young Muslim arrested in Texas last week by Police for bringing a device to school – that very closely resembles a detonator – is no exception.

Whether his parents put him up to it on their own, they acted under guidance from their Imam, or they did it at the direction of Hamas leaders at the Council on American Islamic Relations (CAIR), this event was an information operation designed to affect the response of law enforcement in the long term, and destroy those who responded reasonably.

In the 2006 case of “The Flying Imams” whose actions challenged airport security and intentionally rattled passengers, most reasonable citizens and leaders sided with law enforcement and airport personnel in the actions taken, despite the fact the Imams involved won their civil court case in the matter.  The Muslim leaders involved, as it turns out, are tied to jihadi organizations in America.  Yet, American authorities at the federal level learned nothing from this.

These types of incidents are meant to put law enforcement on their heels, soften the community to the will of Islamic leaders, and make everyone pause before they make a decision.

The secondary purpose is to draw out those who respond reasonably and execute a propaganda operation to destroy them in the public eye, thus gaining credibility for organizations and individuals who mean us harm while simultaneously reducing the likelihood others will speak out in the future.

In military terms, this is a part of “Preparation of the Battlefield.”  When real jihad comes to town, more people will get killed because the community – law enforcement and leadership – will fail to respond appropriately because they have been conditioned to do so.

So let us dissect the incident in Irving, Texas last Monday in which 14 year old Ahmed Mohamed brought a device to his school that anyone who has served in the military or law enforcement familiar with such things might consider very similar to a detonator. 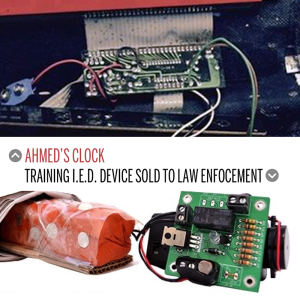 Mohamed brought the device to school and left it plugged in to a wall outlet inside his classroom.  When the device began making noises – like the countdown to an alarm going off – the teacher became concerned. Mohamed responded to the teacher with a flippant and disrespectful tone, which did not provide any comfort to the teacher given the situation.  Once the device was examined, it was believed to be something dangerous, and the police were called.

When questioned by police, Mohamed was rude, disrespectful, and – most importantly – failed to tell police about the device or if any other such devices were in the school.  The police asked reasonable questions and Mohamed’s attitude gave them more, not less, concern. When police told Mohamed about the seriousness of the situation, he taunted them and continued to evade questioning.  So police arrested him in accordance with set policy which treats all suspects over the age of 12 in a similar manner.

At the detention center, as the police were taking his hand cuffs off, Mohamed’s father screamed for police to leave them on and immediately Mohamed’s sister took the photo the world has now seen of him in cuffs.  Poor Mohamed.  A poor innocent boy arrested because of racism and because he is the only Muslim in his school…right?!  Wrong. 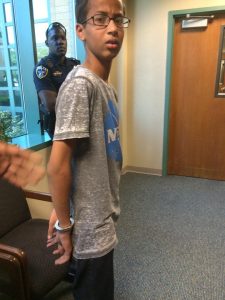 Has the media mentioned that only 10% of the students at Mohamed’s school are white?  Most of students at MacArthur High School are from ethnic backgrounds other than caucasian.

The following morning, as if it were all scripted, in steps the U.S. leadership of Hamas, doing business as the Council on American Islamic Relations (CAIR).

The primary spokesperson for Hamas for this event is Alia Salem (CAIR), who told unquestioning reporters that Mohamed was arrested because he is Muslim.  No one in the Dallas or national media has mentioned that CAIR is a Hamas entity created by the U.S. Muslim Brotherhood’s Palestine Committee (Hamas) in 1994.  Nor has the Dallas media – where the largest terrorism financing and Hamas trial was successfully prosecuted (US v Holy Land Foundation (HLF), 2008) – mentioned that a massive amount of evidence entered at the HLF trial reveals CAIR has been identified by the Department of Justice, the FBI, Members of Congress, and by the Federal Court as being a part of the Muslim Brotherhood’s Palestine Committee which is Hamas, and the FBI ceased all outreach to CAIR because of their ties to Hamas.

The federal judge in the HLF case stated the “government has produced ample evidence” of CAIR’s ties to Hamas, and the federal appellate court panel unanimously agreed.

The FBI has internal reports dating back to the 1980’s identifying NAIT as a Muslim Brotherhood entity dedicated to “Islamic Revolution” here in the U.S.

Local Dallas media has not mentioned any of this, and once the story broke, the President of the United States and Hillary Clinton came to Mohamed’s aid by tweeting out support.

For a 3 minute video on the Islamic Center of Irving, click HERE.

So, what is the result of this Information Operation by the jihadis at the Muslim Brotherhood?  The political left has scrambled to defend young Ahmed Mohamed’s “civil rights” and the political right and so-called “conservatives” are questioning the zero-tolerance policy at Texas schools with regards to things that look like bombs or detonators.  All of this leaves the courageous Mayor of Irving, Beth Van Duyne, standing alone.  Exactly where the jihadis want her.

Since the issue of the Sharia Tribunal in Texas came up in February, and Mayor Van Duyne was identified by the MB as a threat to their efforts, she was targeted.  This “clock” incident is an intentional effort by the MB to take her out of the picture.

You can be sure the next phase of this effort will be to ensure Mayor Van Duyne has little credibility with those in the Dallas/Irving area who remain clueless about the jihadi threat.

The global Islamic Movement is led by the International Muslim Brotherhood.  Their stated doctrine entered into evidence in the largest terrorism financing and Hamas trial in American history calls for a Civilization Jihad against us to overthrow our government and replace it with Sharia.  That trial was adjudicated in Dallas, Texas in 2008.  Yet, leaders and citizens on both sides of the aisle are embracing the very Islamic organizations which are a part of this hostile jihadi network.

Yet, the purpose of this operation is to ensure law enforcement heel back and respond slowly if something does happen.  The intentional outcome of this operation is to put all of us on the defensive about the Islamic threat, and all of this is a part of their stated doctrine.  The same doctrine our enemies continue to site in furtherance of what they do all over the world, and our leaders tell us not to worry about.