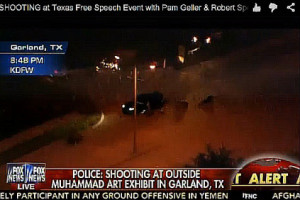 As details flow in about yesterday’s attack by two jihadis outside the Draw Mohammed Cartoon contest -hosted by Pamela Geller’s  American Freedom Defense Initiative in Garland, Texas – law enforcement, media, and other are “still not sure” the two incidents are related, and Garland law enforcement officials have not yet called it “terrorism.”

Additionally, some in the American media – as they are want to do – are primarily condemning the event, and not leading with a condemnation of Islamic Sharia which supports such attacks.

One has to ask what level of delusion have we reached as a nation.

Two jihadis responded to calls by ISIS and many in the Muslim community on twitter, website, and other media outlets to silence the insults on the Muslim prophet by making the affirmative decision to die as martyrs.

Twitter feeds reveal that one of the jihadis sent a tweet before the event as did ISIS jihadis.

One of the jihadis has been identified as Elton Simpson who was indicted in January 2010 in the Federal District of Arizona for False Statements to federal agents in an FBI International Terrorism investigation.  In Judge Mary Murguia’s ruling (March 14, 2011) she stated:  “The Government has, at best, established that the defendant, who harbors sympathy and admiration for “fighting” non-Muslims abroad and establishing Shariah law, made a false statement about traveling to Somalia.”  In the investigation, Simpson made clear to an FBI source that waging jihad and establishing the Caliphate were a Muslim’s responsibility, and that dying in jihad, which is martyrdom, will guarantee entry into Paradise.

Isn’t it strange how all of the jihadis get their “version” of Islam wrong in the exact same way.

We continue to see this enforced by Muslims across the globe.  In London a few years ago Muslims openly called for the killing of Dutch Member of Parliament Geert Wilders – who was at the event in Texas – for his film “Fitna.”  In Denmark, Paris, and elsewhere, we have seen Muslims enforcing this by killing people understood to be “innocent” under Western laws but “guilty” under Sharia.

In America, we have seen training programs detailing the Muslim Brotherhood’s jihadi network in the U.S. and the doctrine of Sharia shut down for our military, intelligence, and law enforcement professionals because it “offends” Muslims, despite the fact the very organizations and leaders complaining can be easily identified as a part of the U.S. Muslim Brotherhood and Hamas.  This is the application of the Islamic Law of Slander (to say anything about Islam or a Muslim he would dislike) in America without ever having to go to court.

What is truly offensive is the capitulation by American leaders of both political parties at the national level to ignore an imminent threat to our liberty while the media and those on the political left (redundant) – like the Southern Poverty Law Center – prattle on about the need to be “sensitive” to Muslims while defending terrorists and their desire to overthrow our nation.  Tell that to the children whose heads are on spikes, the tens of thousands of Christians now dead in places like Syria, Iraq, Libya, and across much of Africa today, and to the thousands of Jewish refugees from those nations as well as Europe.  Even Europe refuses to defend the Jewish community, but has no problem bending over backwards to ensure the jihadis are not offended.

The answer is for citizens at the local level in America to hold their local leaders in business, law enforcement, and elected officials accountable.  We the people need to step up and put positive pressure on local elected officials so they will let trained and educated law enforcement organizations to identify jihadi organizations and leaders in their areas, and root them out using all means available.

Pamela Geller, Rober Spencer, Geert Wilders, and those who speak truth about a real threat – doctrinal Islam – should be applauded.  Our leaders have a Constitutional and statutory obligation to defend our rights, and they have a duty to take action against the jihadi network in America – not assist it.

If we fail to do this onslaught by the jihadis and their left-wing collaborators, the Republic will remain at grave risk.