Jihadis Continue to Strike Around the Globe 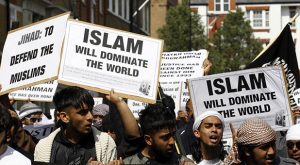 In the last 30 days, jihadis (sharia adherent muslims) have committed 144 attacks in 24 countries around the globe, reminding us the war is yet flagrant. (www.ReligionOfPeace.com)

Here is a list of jihadi attacks that have been reported from March 31st through this morning:

Pakistan:  a couple is killed for marrying each other by choice versus an arranged marriage; a Shiite muslim killed by sunni muslims; a Christian family is attacked – 4 killed.

India:  a father of three is shot and killed by jihadis.

Iraq:  a jihadi blows himself up killing 3

Nigeria:  18 civilians are dead and 64 wounded as jihadis from Boko Haram clash with Nigerian soldiers.

Germany:  1 dead in apartment fire intentionally set by muslim; 4 muslim migrants from Syria arrested for molotov cocktail attack on Turkish Embassy; a State of Emergency declared in Duisberg as rival muslim gangs openly clash in the street with knives and machetes; headmaster of school tells girl bullied by muslims for not covering up to wear hijab.

France:  man screaming “I am a terrorist” drives his car into crowd at music festival; muslim migrant beats and tortures a girl who escapes to freedom.

Jihadi News from the US

A Turkish muslim man was indicted before Easter for beating a Jewish man in Cincinnati because he is Jewish.

Mohamed Elshinawy is sentenced to 20 years in Maryland for plotting attacks in U.S. in support of ISIS using weaponized drones. (3/30/18)

Tunisian muslim Amor Ftouhi was charged with terrorism on 3/21/18 for his June 2017 attack when he stabbed a police officer at a Flint, Michigan airport.

An imam in New Jersey teaches a class to other imams on how not to get caught calling for the holocaust of Jews.