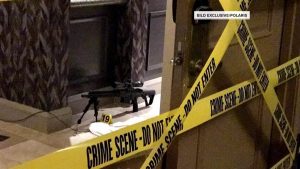 How bizarre and unprofessional can the investigation into the Las Vegas attack get?

How has years of Muslim Brotherhood propaganda and its ability to shut down training on Islam inside the U.S. government impacted investigative efforts by the FBI and local/state law enforcement?

News coverage on the event – the “deadliest mass shooting in U.S. history” – seems to have all but disappeared.

UTT has enumerated the facts we know about the attack as of now, which is not the investigative premise from which investigative action are being taken.  See our article here.

Most notably, the Islamic State claimed the attack and the attacker as theirs on no less than five occasions since the attack.  Yet investigators are not treating that possibility as the most likely investigative avenue to pursue.

In speaking to an FBI colleague, UTT was told, “Listening to FBI agents speak about the Las Vegas attack reveals there is an automatic dismissal on their part that this attack has anything to do with the Islamic Movement.  This attitude is so well seated in the FBI that it drives all investigative efforts away from Islam and the Islamic State.”

Knowing and understanding the Islamic threat and their doctrine sharia – the thing that drives everything they do – is critical in cases like this.  But at the ground level, basic investigative steps will necessarily be missed and are being missed because investigators, no matter how proficient or how much experience they have, will never get to the truth because they are programed to specifically not get to it.

So for all of you out there who are not investigators, yet see this event clearly because you do understand the Islamic threat, the Muslim Brotherhood Movement, and sharia, we (UTT) hope this helps you understand why you can see this for what it is but investigators cannot.

The Las Vegas attack, more than any other, puts the success of the Islamic Movement on full display while highlighting the intentional outcome of all of their efforts – complete investigative collapse in the face of overwhelming reality.

One more investigative lead that is likely not being followed as it should be…Steven Paddock’s girlfriend, Marilou Danley, is being defended by attorney Matthew Lombard, who also defended Oklahoma City bomber Terry Nichols.

What are the odds?