A lot of information has been revealed about Broward County Sheriff Israel in Florida in recent weeks.  Most noteworthy is the fact he hired, supported, and defends Hamas leader Nezar Hamze.  Hamze served as the Executive Director of Hamas doing business as CAIR-Florida, and currently serves as CAIR-Florida’s second in command.  Hamze is also a Deputy with Broward County Sheriff’s Office.

In light of this, UTT believes it is important to bring to light a few anecdotal red-flags inside local law enforcement highlighting the utter lack of understanding local police have of the jihadi threat.

To be fair, many state and local police agencies and sheriff’s departments assume the FBI is actually doing it’s job and adequately informing them of “terrorism” matters.  These assumptions are incorrect.

In January 2016, Duke University’s Triangle Center on Terrorism and Homeland Security
Sanford School of Public Policy produced a report sponsored by the Department of Justice entitled “The Challenge and Promise of Using Community Policing Strategies to Prevent Violent Extremism.”

The very title of the Duke study reveals it is a failure from the beginning.

100% of those waging war against the West identify themselves as “muslims waging jihad in the cause of Allah to establish an Islamic State (caliphate) under sharia (Islamic Law).”

This Grand Canyon size disconnect from reality should help citizens understand why many local police departments do not Understand the Threat.

Near the beginning of the Executive Summary the Duke report states:

“Policing agencies are unlikely to be successful in creating partnerships to address violent extremism until
they establish trusting relationships with the communities they serve.”

Sharia, Muslim Brotherhood doctrine, and evidence in the largest terrorism financing trial ever successfully prosecuted in American history – US v Holy Land foundation for Relief and Development, Northern District of Texas (Dallas) 2008 – all reveal, Islamic organizations in the United States and their personnel work inside government entities, with Jewish and Christian organizations, with the media, in education, and with security organizations (military, police, et al) to (1) influence them and (2) gather intelligence.

Yet around the nation, we see police working at the ground level with jihadis and jihadi organizations.

Police leadership in Prince George’s County, Maryland conducts their Command/Staff training at the Diyanet Center of America in Lanham, Maryland which is owned by the Turkish government.

Sources in one police department in the Chicago suburbs alert UTT that sharia-adherent muslims (aka jihadis) give input as to who gets hired.  The source also noted the department works with the local Muslim Brotherhood Islamic Center. 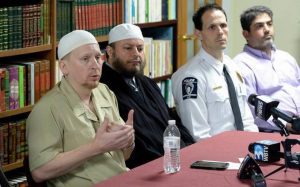 The Las Vegas Police Department has a vigorous “outreach” program to the Islamic leaders in the community in sin city.  See one article here. 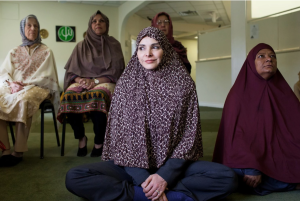 In Arlington, Texas police applied for a Homeland Security grant to improve relations with the growing muslim community.  Modeling the Department of Homeland Security’s “muslim outreach” is probably not something for which Texas should strive.

Yet, do the Arlington Police know the Islamic Society of Arlington (TX) is a Muslim Brotherhood mosque which funds terrorism?

The answer is getting the truth about the threat of the Islamic Movement to your local police department, sheriffs, and other local officials.  That is the job of well-informed citizens.