It is alleged that Tiny Lab is being used to obtain personal data from children and that Google, Twitter, and other companies facilitate the data transfer.

This case brings to light a much broader power grab in the war against the Marxist Movement in the United States, which seeks to impose United Nations educational mandates on U.S. children, while violating federal privacy laws to collect data and manipulate how American children are educated. 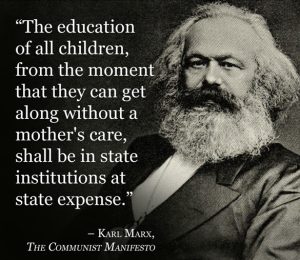 U.S. public school education is rapidly and intentionally being pushed through online curricula and programing which (1) illegally collects data from the children using the system in violation of federal privacy laws to protect children (COPPA) and (2) draws students away from an understanding of America’s founding principles, system of government, and free market economy to one in which students are taught they are individual workers in a global community/economy who happen to live in the United States.

States are creating curriculum using OER (Open Education Resources) in which no entity controls what information is uploaded and made available.  OER is a term coined by the United Nations Education Division (UNESCO) in 2002.

In Texas, for instance, State law allows the Texas Permanent Education Fund to be used for this type of online curriculum thus bypassing the State Board of Education.

The Research Manual from 1994 is a compilation of study and research conducted by professionals to expose what the real agenda is to this quiet takeover of U.S. public education. 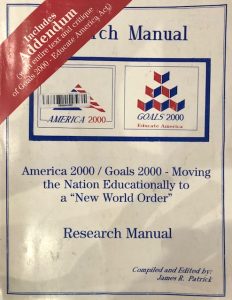 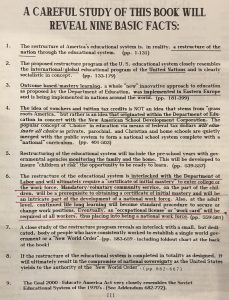 Under the Every Student Succeeds Act (Pre-school through workplace), all students, to include trainees for trade professions, are mandated to have certain curriculum designed to influence values, beliefs, and behaviors.    Today, technology is the access point to these students – both children and adults.

2009 – all 50 states received money from the federal government to upgrade online systems for education.

2012 – the President changed the regulations regarding the Federal Education Rights and Privacy Act (FERPA) to state children’s private data can be collected without parental consent for the sake of “educational purposes.”  This opened the door to companies like Microsoft and Google to the personal information, online data and history, and other online info of American children in order to create data, apps, and online curriculum to influence/control how children form their worldview.

2014 – Congress passed Workforce Innovation and Opportunity Act (WIOA) which binds education under the Departments of Labor, Health & Human Services, Defense, and Education.  Therefore, even if the Department of Education were completely eliminated, federal monies would still flow to states through federal governmental departments regarding educational matters.

2015 – Congress passed the Every Student Succeeds Act (ESSA), which codifies the Common Core College and Career Readiness Standards.  Therefore, for a state to accept the WIOA funds, they must comply with teaching the College and Career Readiness Standards at all levels, from kindergarten through high school and into the workforce training/trade programs.  This is not only institutionalizing Marxist ideology, but influencing children and citizens at numerous levels, and collecting data on everyone using the system, including children, in violation of federal law.

At the state level, states are passing legislation that mandates ESSA standards through online adaptive learning assessments and instruction.  The outcome:  teachers are, in many ways, removed from the teaching and testing process in favor of online standards.

In short, U.S. public school education is rapidly and intentionally being pushed through online curricula and programing which (1) illegally collects data from the children using the system in violation of federal privacy laws to protect children (COPPA) and (2) draws students away from an understanding of America’s founding principles, system of government, and free market economy to one in which students are taught they are individual workers in a global community/economy who happen to live in the United States.

What has been briefly described in this article is nothing short of the coordinated Marxist takeover of U.S. education, and a surrendering of our privacy as citizens.

In this war, Americans must (1) speak truth boldly about the threats we face from the Marxist and Islamic Movements, and (2) take back our education system at the local level.  Citizens must be intimately involved in the local elementary, junior high, and high school curricula, get involved in who sits on the local school board, and ensure our children are protected and learning truth about America’s founding.