From these discussions it was revealed that members of the Council of Islamic Organizations of Greater Chicago (CIOGC) are using interfaith outreach with Christian churches and Jewish synagogues for the purpose of (1) studying them internally to determine how to best influence their congregations to soften them towards Islam, and (2) to conduct pre-operational surveillance of the churches and synagogues.

Law enforcement officials are aware CIOGC is tied directly to the U.S. Muslim Brotherhood, and is heavily influenced by Hamas doing business as the Council on American Islamic Relations (CAIR).

The CIOGC is considered by some in the Chicago community as a “moderate” organization working to “bring the community together.”  In fact, they are using and manipulating non-Muslim religious leaders to intentionally weaken their positions so Muslims will have an easier time controlling public opinion and the opinion of the Christian/Jewish congregations so when violence strikes the Christians and Jews will rely on – not break from – the jihadis posing as friends. 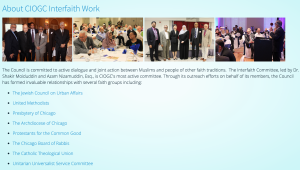 An example of how this will work here in America is the killing of a Catholic priest in France in July 2016. Muslims killed the priest during Mass, and within days, Christian and Jewish leaders were standing arm in arm with the leaders of the jihadi muslim community who support jihad and killing priests.

Exactly the objective of the efforts of the Islamic leaders.

Relatedly, UTT also received reports Monday confirming other churches in the U.S. are experiencing similar episodes as described in UTT’s article about churches being surveilled by Muslims.

Because of the increased threat to U.S. churches, UTT has changed it fee for programs in churches, and for the time being will conduct briefings for churches on the Islamic threat for a significantly reduced rate. Please contact us at info@understandingthethreat.com for more information.

On a day when a muslim Turkish policeman assassinated the Russian Ambassador to Turkey and two muslims plowed a truck into a crowded Christmas market in Berlin, Germany killing at least 12 and wounding approximately 50 others, American religious leaders need to get attentive quickly and face the wolf inside their house.