From all accounts, Molly Norris was a politically left-leaning cartoonist in Seattle who thought people just needed to lighten up a bit, and be able to freely express themselves, no matter what the topic. 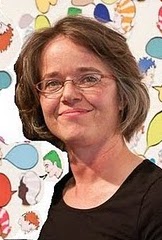 In 2010 Norris suggested a “Everybody Draw Mohammad Day.”  A few days later she received her first death threat from a Muslim.

The FBI told her she was in danger after Anwar al Awlaki told the Islamic world Norris was fair game for killing because she insulted Islam’s prophet Mohammad.

Readers may remember Anwar al Awlaki was the former leader of the Dar al Hijra Islamic Center (mosque) in Falls Church, Virginia and former leader of Al Qaeda in Yemen until the U.S. dropped a missile on him and killed him in September 2011.  He was the guy who gave talks in the U.S. Capitol, defended by the likes of NPR who said Awlaki was the new face of “moderate” Islam – before he wasn’t.

The threat is real.  Al Qaeda has included Molly Norris on their list of “Most Wanted” in their publication “Inspire” magazine.

Norris went into hiding and has not been seen since.  She changed her identity without help from the government.

Instead of destroying the Muslim Brotherhood’s Islamic/Jihadi Movement in the United States openly threatening a U.S. citizen and her God-given right to free expression, the government continues to “outreach” to the suit-wearing jihadis who advocate the same ideology as ISIS and Al Qaeda.  Namely, in this case, the killing of anyone who “offends” them. 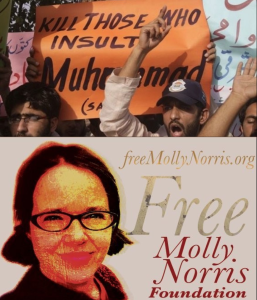 Let’s see…how many of the people in the United States who publicly speak truth about Islam and the threat it poses have been directly threatened with bodily harm by muslims…oh, that’s right…all of them.