In response to President Trump’s second Executive Order designed to keep individuals from hostile nations from entering the United States, the Attorney General of Hawaii announced he will file suit against the Trump administration.  The plaintiff listed in Hawaii’s lawsuit is Dr. Ismail Elshikh, the Imam of the Muslim Association of Hawaii.

The address of the Muslim Association of Hawaii is 1935 Aleo Place, Honolulu, Hawaii.  The property records for Honolulu reveal this property is owned by the North American Islamic Trust (NAIT) – the bank for the Muslim Brotherhood in North America.  You can search the address HERE for yourself.

NAIT was created in 1973 by the Muslim Brotherhood’s Muslim Students Association per their own website.

“The North American Islamic Trust (NAIT) was organized by the leaders of the Muslim Students Association of the United States and Canada (MSA) in 1973 as the parent organization of various Muslim groups in the U.S. and Canada.  The leadership of NAIT, MSA and other Muslim groups are inter-related with many leaders and members of NAIT having been identified as supporters of the Islamic Revolution as advocated by the Government of Iran (GOI).  Their support of JIHAD (a holy war) in the U.S. has been evidenced by the financial and organizational support provided through NAIT from Middle East countries to Muslims residing in the U.S. and Canada.”

A declassified FBI confidential informant (CI) report dated 8/17/1988, details the Muslim Brotherhood’s activities in the United States at the time and states: “(CI) advised that in addition to the internal political structure and organization of NAIT as controlled by the IIIT leadership that as members of the IKHWAN they are involved in organizing external political support which involves influencing both public opinion in the United States as well as the United States Government.  (CI) has advised that the Ikhwan is a secret Muslim organization that has unlimited funds and is extremely well organized in the United States to the point where it has set up political action front groups with no traceable ties to the IIIT or its various Muslim groups. They also have claimed success in infiltrating the United States government…the IIIT leadership has indicated that in this phase their organization needs to peacefully get inside the United States Government and also American universities. (CI) noted that the ultimate goal of the Islamic Revolution is the overthrow of all non-Islamic governments and that violence is a tool…”

On the last page of the U.S. Muslim Brotherhood’s strategic document (An Explanatory Memorandum), the MB identifies NAIT as one of their organizations.

The stated objective of the Muslim Brotherhood in the United States is to wage civilization jihad “by OUR hands” to overthrow our government and replace it with an Islamic government ruled by sharia – Islamic law.  See “An Explanatory Memorandum” page 7 of 18.

The US v HLF evidence revealed that all of the prominent Islamic organizations in America are a part of the Muslim Brotherhood’s Movement here, including NAIT. 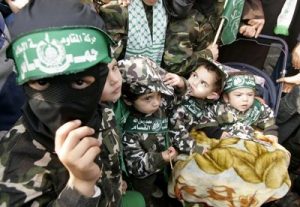 Because of the massive evidence revealing NAIT is a Muslim Brotherhood organization which directly funds terrorism, the U.S. Department of Justice lists NAIT as an Unindicted Co-Conspirator in the largest terrorism financing and Hamas trial ever successfully prosecuted in American history (US v HLF).  See the Unindicted Co-Conspirator list here.  NAIT is listed on Page 8, paragraph VII.

Being named an “Unindicted Co-Conspirator” means the government has enough evidence to indict but decides not to at that time.  In fact, after the HLF trial ended in November of 2008, the Department of Justice moved forward to prosecute the founder of the Council on American Islamic Relations (CAIR) and CAIR itself, but after approximately six months, that effort was shut down by Attorney General Eric Holder and since that time none of the hundreds of unindicted co-conspirators have been prosecuted by the Department of Justice.

In response to NAIT’s request to the court to have its name removed from the unindicted co-conspirator list, the Department of Justice filed a memorandum in which it states (page 13):

“ISNA and NAIT, in fact, shared more with the HLF than just a parent organization.  They were intimately connected with the HLF and its assigned task of providing financial support to Hamas.”

The “parent organization” to which the U.S. government is referring is the Muslim Brotherhood.

“The Government has produced ample evidence to establish the associations of CAIR, ISNA and NAIT with the HLF, the Islamic Association of Palestine (IAP), and with Hamas.”

HLF and IAP were Hamas (TERRORIST) organizations.  This ruling declares NAIT is directly associated with the terrorist organization Hamas headquarters overseas and its front organizations in the United States.

It should be noted, Hamas is an inherent part of the Muslim Brotherhood.

The Muslim Association of Hawaii is a NAIT property.  The leader of this organization, Dr. Ismail Elshikh, has led several other Muslim Brotherhood organizations and would not hold those positions if he himself were not a Muslim Brother.

If this offensive assault by the Muslim Brotherhood against the President of the United States and his effort to secure our nation and keep our enemies out is not met with significant force by the U.S. government, the Muslim Brotherhood will view this as more weakness and push harder and more violently in the coming months.