Today in New York City, a muslim jihadi plowed a truck into people killing 8 and injuring approximately 11 others.

He did not do it because he is “deranged.”

He did it because 100% of Islamic doctrine (sharia) mandates jihad (warfare against non-muslims) until the world is under Islamic rule. 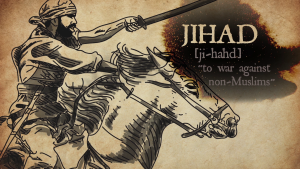 How much longer will Americans tolerate the killing our citizens by muslim jihadis?

How much longer will Americans tolerate leaders like New York Mayor De Blasio who coddle, pander to, and support the leaders of jihadi organizations and then feign surprise when jihadis do what Islam commands them to do?

How much longer will Americans tolerate leaders like National Security Advisor Herbert McMaster whose words reveal his utter ignorance of Islam and the threat it causes, and his inaction leads, again, to the death of American citizens?

The US v Holy Land Foundation trial was the largest terrorism financing and Hamas trial ever successfully prosecuted in American history.  The evidence in this case, after a 15 year FBI investigation, reveals there is an Islamic Movement in the United States led by the U.S. Muslim Brotherhood whose stated goal is to overthrow the U.S. government and create an Islamic State under sharia – same goal as the Islamic State and Al Qaeda.

The evidence also reveals that all of the prominent Islamic organizations in the United States are a part of this Movement including, but not limited to:  the majority of the over 3100 Islamic centers/mosques, Islamic Societies, Muslim Students Associations, Muslim American Society, Muslim Public Affairs Council, Islamic Circle of North America, Council on American Islamic Relations (Hamas), Students for Justice in Palestine (Hamas), and others.

The majority of the over 3100 Islamic centers/mosques and all of the prominent Islamic organizations in the United States teach muslim children and muslim adults the same things the Islamic State and Al Qaeda teach their fighters – that jihad is warfare against non-muslims and is obligatory until the entire world is under sharia (Islamic law).  These Islamic sites are the incubators for jihadis just like:  the Islamic Society of Boston supported the Boston marathon bombers; the Islamic Center of Nashville and the local MSA supported the Little Rock, Arkansas jihadi; the Dar al Hijra Islamic Center (Falls Church, VA) and the Islamic Center of Southern California supported 9/11 hijackers and Ft Hood jihadi Major Nidal Hasan; the Islamic Society of Chattanooga supported the jihadi who killed our men in uniform; and on and on it goes.

These places need to be raided, shut down, their leaders arrested and their assets seized.

Leaders like National Security Advisor Herbert McMaster, New York Mayor De Blasio, and others like them  have a professional duty to know these easily identifiable threats and do not.  Now – AGAIN – Americans are dead because of their unprofessionalism – the legal definition of criminal negligence.

We put doctors and lawyers in jail for this, and it is high time our local and federal leaders whose unprofessionalism leads to American deaths go to jail for it too.