Germany’s Chancellor Angela Merkel is directly responsible for the murders of her citizens in the four jihadi attacks in Germany in the last week. 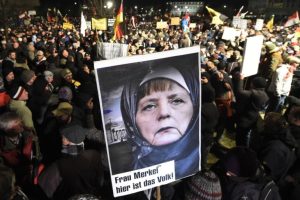 Merkel’s continual defense of Islam in the face of objective reality they are working to overthrow non-Islamic governments including her’s, the Syrian Muslims she continues to bring into Germany in record number – calling them “refugees” even though they do not meet the international/legal definition of “refugees,” and her gross disregard for the security of Germany despite warnings from security officials in and out of Germany (including UTT) have all brought this explosive jihad to the heart of Deutschland.

Even Chancellor Merkel might see there is a trend among these incidents.

100% of Islamic doctrine mandates jihad until the entire world is under Islamic Law (Sharia).  All of sharia understands those who migrate into non-Muslim lands are called Muhajiroun – those who emigrate in the cause of Allah.  This is a form of jihad and is, according to the International Muslim Brotherhood, the 5th of 6 stages in conquering non-Muslim nations.

In Sharia there is no understanding of gratitude or mercy for the acts of non-Muslims towards Muslims. From the Islamic perspective, the actions by the leadership of Germany – specifically Angela Merkel – demonstrates weakness and submission to Islam and, therefore, Muslims must respond with more force because they must wage jihad when they have the strength and ability to do so.

When the enemy of Muslims signals they are weak, Muslims must respond strongly.

It is a good lesson for U.S. leaders who believe appeasing the Muslim population and “working with them” to find a solution to “terrorism” is a good idea.