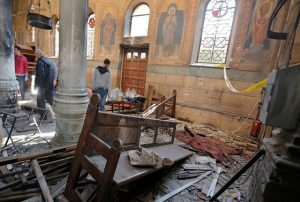 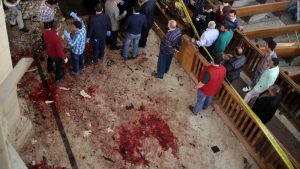 The first bomb exploded in St. George’s Church in Tanta (60 miles north of Cairo) killing at least 27 and injuring nearly 80 others.

The second Muslim jihadi blew himself up inside St. Mark’s Cathedral in Alexandria where Coptic Pope Tawadros was celebrating Mass.  At least 17 people were killed and nearly 50 were injured.  Pope Tawadros was not injured in the attack. 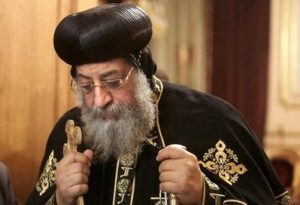 Before European or North American leaders begin telling us these incidents of “violent extremism” have nothing to do with Islam, let us review Islamic doctrine.

Islam defines itself as a “complete way of life governed by sharia (Islamic law).”  According to unanimous rulings by the highest authorities in Islam, sharia comes from the Koran and the example of Islam’s prophet Mohammad, whom the Koran calls a “beautiful pattern of conduct” for Muslims to follow for all time.

In the most authoritative Islamic reports of what Mohammad said:

“Allah’s Messenger said: ‘I have been ordered (by Allah) to fight against the people until they testify that none has the right to be worshipped but Allah and that Muhammad is Allah’s Messenger, and offer the prayers perfectly and give the obligatory charity, so if they perform that, then they save their lives and property from me except for Islamic laws and then their reckoning (accounts) will be done by Allah.’” [Bukhari 25: Book 2, Hadith 18]

In the Koran beheadings, crucifixions, whippings, stonings, and amputations are punishments from Allah for all time, which is why they can be found in modern books of Islamic Criminal Law (Hudud) all over the Muslim world.

The last 1400 years of world history demonstrate the West has defeated Islam on the battlefield to preserve liberty and the lives of free peoples again and again.  From Tours (France) in 732, to the launch of the Crusades in 1095 to stop the unprovoked Islamic attacks on Christian holy lands, to the miraculous victory of Christians over the Muslims at the Battle of Lepanto in 1571, to the defeat of Muslims at the Gates of Vienna in 1683 thanks to the Christian alliance led by Polish King Jan Sobieski, the West has been forced to deal with Islam’s barbaric and unprovoked attacks since the hijra of Mohammad from Mecca to Medina in 622 AD.

Why?  Because Islam’s god Allah and the “perfect example of a man” Mohammad told Muslims it is a permanent command for all Muslims to wage jihad (“warfare against non-Muslims”) until the entire world is under the control of a global Islamic state ruled by sharia (Islamic law). 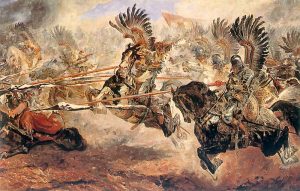 What happens overseas in this war, happens here in America.  Muslims are surveilling Christian churches while “outreaching” to the Christian community under the guise of “Interfaith Dialogue.”  However, sharia obliges Muslims to lie to non-Muslims when the “goal is obligatory.”  Jihad is obligatory.

In the aftermath of the attacks on Egyptian churches this Palm Sunday, Christians will pray for the victims, their families, and their enemies who inflicted death on one of Christianity’s holiest days.

Muslims cheer the jihadis and the death of Christians.

The Christian West follows the pillar of it’s societies:  Love they neighbor.  Islam follows the sharia.

The difference could not be more stark.