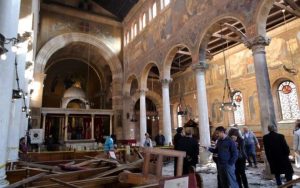 In the shadow of the savage killing of a priest by muslims during Mass in Normandy, France (July 2016) and the bombing of St. Peter and St. Paul chapel – a part of St. Mark’s Coptic church in Cairo, Egypt – four weeks ago, UTT has received reports in the last several weeks from law enforcement, pastors, and citizens revealing muslims are conducting pre-operation surveillance inside U.S. churches during services.

The information received by UTT from different states indicates the manner of the surveillance is similar in each case.

Two muslim males will come into a church during the service and sit together in the back of the church.  They will often take pictures and record video.  When approached by concerned ushers they will either tell their questioners they are “interested” in becoming Christians or they will run.

This information has been passed to appropriate law enforcement officials, and UTT is aware of a joint investigation between local police and the FBI in at least one of the cases.

Relatedly, in February 2016, an FBI criminal complaint for Khalil Abu-Rayyan was filed in Eastern District of Michigan alleging he was a muslim who wanted to wage jihad in the U.S., and specifically quoted Abu-Rayyan as confessing his plan to kill Christians at a large church.

The affidavit for the complaint states Abu-Rayyan told an FBI Undercover (UC) “I don’t know the name of it (church), but it’s close to my job.  It’s one of the biggest ones in Detroit…a lot of people go there.  Plus people are not allowed to carry guns in church.”

Abu-Rayyan told an undercover FBI employee attacking a church would be “easy…(If I) can’t go do jihad at the Middle East, I would do my jihad over here.”

American pastors need to be aware their churches are significant targets.  See other related articles here and here.

UTT offers this important guidance for pastors of churches of all denominations:

In all of this, UTT stands ready to help.  Reach out to us at www.UnderstandingtheThreat.com.

If you have details of similar events at your church, please send them to info@understandingthethreat.com.  Please provide contact information.