On Thursday, 18 year old Faisal Mohammad stabbed several students at the University of California at Merced before being shot to death by police.  University officials and investigators have discounted any possible political or religious motivations behind the attack.

From the Mercer Sun-Star:

The UC Merced student who stabbed four people during a campus rampage “intended to kill a lot of people,” according to authorities who found a detailed manifesto on his body.

Merced County Sheriff Verne Warnke told the Sun-Star on Thursday that the document found on the body of 18-year-old Faisal Mohammad included “a detailed list of his targets and his intentions.”

The computer science and engineering freshman planned to stab a police officer, take that officer’s firearm and use it to shoot students in a dormitory, Warnke said.

Mohammad’s motive appears to have been anger he felt over being “kicked out of a study group,” Warnke said. “He was mad at a student.”

UC officials and investigators have discounted any possible political or religious motivations behind the attack.  UC Merced Chancellor Dorothy Leland said there was no evidence to believe the attack was “in any way related to terrorism.”

Preliminary evidence, she said, suggests Mohammad “appears to have been motivated by personal animosities, not a political agenda.” She said, “it would be irresponsible” to draw any link to terrorism “based solely on the ethnicity of the suspect.”

Speaking to reporters Thursday, Warnke echoed Leland’s statements, saying evidence gathered suggests the attack was an “act of an individual for a vendetta … nothing to indicate there was any political or religious motivation.”

Investigators seized numerous items from the backpack Mohammad carried into the classroom, including several zip-tie handcuffs, petroleum jelly, a night-vision scope, a safety hammer, and rolls of duct tape, among other things.

Warnke said it remains unclear precisely what Mohammad had planned. Local and federal authorities, including the FBI and U.S. Department of Homeland Security, have yet to find anything to explain his motivation.

Is it true we have “yet to find anything” indicating a motive?

It appears the jihadis’ information operation is still in full gear and producing excellent results.

Why is it that every time a Muslim kills or tries to kill someone, law enforcement and everyone else immediately explains it away as everything but what it likely is – JIHAD.

Since 100% of all Islamic doctrine mandates jihad until the world is under Sharia (Islamic Law), and 100% of all Sharia only defines “jihad” as “warfare against non-Muslims,” it stands to reason that when a Muslim male attempts to kill non-Muslims in a manner that internationally recognized jihadi (“terrorist”) organizations (ISIS/Hamas) recently called for, that motive would be on the table as a logical and reasonable reason the suspect did what he did.

Faisal Mohammad is a young Muslim male.  He may have attended the Islamic Center of Merced, but we are not sure at this point.  He stabbed his victims with a large knife.  In September 2014, ISIS called on Muslims in the U.S. to use any weapons available, including knives, to kill U.S. soldiers.  In January of this year, ISIS called on Muslims to conduct Individual Jihad using all means available, including knives, swords, etc. 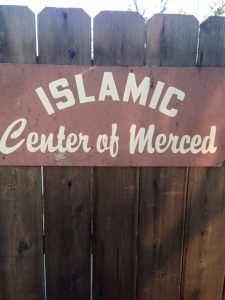 Recently, Hamas has specifically called for Muslims to stab non-Muslims (especially Jews in Gaza), and have even made videos and lesson plans on how to do it.

Not hard to keep the “JIHADI” option on the table regarding Faisal Mohammad when this information is known and understood.  This is a lot more likely than…he was mad he got kicked out of a study group.

According to our government officials:  9/11 was perpetrated by those who (as President Bush said) “blasphemed” the name of Allah; Fort Hood and the recent beheading in Oklahoma by a Muslim were acts of “workplace violence”; the killing of Private Andy Long at the Little Rock, Arkansas Army Recruiting Station by a Muslim who took the name “Mujahid” was a drive by shooting (according to the U.S. Department of Justice); when Muslims plow their cars into crowds of people – like at UNC or Fremont, California – or try to kill people with axes or swords, they are “crazy”; the mob that killed our Ambassador in Benghazi was an “extremist militia”; and any Muslim who does what the Quran and the prophet Mohammad command them to do – wage jihad – are “misinterpreting” Islam.

Why is it so hard to believe that there are some Muslim who actually take the Quran and the Sunnah (ie what Islam teaches) seriously and act on it?

While officials admit they are not sure of a motive in the UC – Merced incident, they sure were quick to announce what it wasn’t.

As it turns out, the Chancellor of the University of California – Merced, Merced County Sheriff Vern Warnke, the FBI and DHS, as well as the local and national media, deceived the public about the true nature of the stabbing attack on students and others on campus by Faisal Mohammad.

As UTT tweeted and reported on the day this event occurred, the suspect was a Muslim male and the professional course of action would be to treat this as an act of jihad for the reasons stated in the above article.

Now, a reporter in Merced has published an article citing several law enforcement sources stating there is a lot more to this than originally reported, including Mohammad’s support for ISIS.

In fact, on the day of the stabbing, law enforcement sources found an ISIS flag in Faisal Mohammad’s notebook.  In the FBI, we used to call that an “investigative clue.”

Fox News today published an article questioning the stabbers motives and noting the “Manifesto” found in Faisal Mohammad’s backpack called for him to cut off one of his victim’s head and praise Allah.  These are also investigative clues.

As it turns out, this was an act of jihad on a U.S. college campus by a Muslim male doing what Allah commands, and what the prophet Mohammad did.

The Merced Sheriff’s Office told UTT today they are sticking with their original story – Faisal Mohammad was angry because he got kicked out of a study group.  There has been no response to a series of questions from UTT to the Sheriff on this matter.

Will the FBI and DHS begin training its agents and its local law enforcement partners on Sharia, the root of the global jihad?  No they will not.  The FBI will continue to use Hamas and Muslim Brotherhood organizations to outreach to the Muslim community to ensure no Muslims are offended…and Americans will continue to be killed as a result.