How many Muslims who kill in the name of Allah have to profess their loyalty to the teachings of Islam in open court before judges and attorneys realize Islam mandates violence according to sharia (Islamic Law)?

On September 24, 2014, Alton Nolen, a Muslim, sliced the neck of Colleen Hufford – a former co-worker at Vaughan Foods in Moore, Oklahoma – and then proceeded to saw her head off. 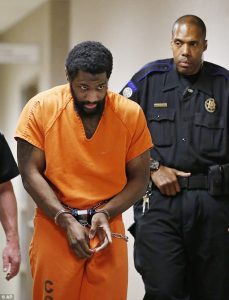 As the case has moved through the system, defense attorneys, prosecutors, and the judge in the case seem to have no clue about what Islam teaches and why it is pertinent to the case.

Nolen, whose appearance prior to his killing of Colleen Hufford was increasingly visibly sharia compliant, stated he follows the teaching of Islam – ie the Sharia.

At the hearing in Norman, Oklahoma last Friday, after the judge and attorneys made it clear his guilty plea would likely lead to a death sentence, Nolen stated:

“I’m being (held) captive to the disbelievers of Allah, the one and only God…it’s part of my religion that when death faces you, you do not back down.”

Yet Cleveland County District Judge Lori Walkley and even Nolen’s defense attorney are concerned he is not mentally fit to make this decision.

Why?  As we have heard time and again after Muslims obey the sharia and kill non-Muslims or Muslims who do not adhere to sharia, no “religion” would teach violence against others.  But Islam does.

On June 21, 2010 in the Southern District of New York, Times Square bomber Faisal Shahzad entered his guilty plea in court where he stated, “I consider myself a mujahid, a Muslim soldier…we Muslims are one community.  We are not divided.”

When the judge asked him, “Were you aware what you were doing was a crime?” Shahzad responded with “I would not consider it a crime…I don’t care for the laws of the United States.”

Right.  Because jihadis only care about sharia.

On October 5, 2010 at the sentencing hearing, Shahzad was even clearer about his motives and beliefs, yet the trial judge, the Honorable Miriam Goldman Cedarbaum, corrected him on his beliefs. 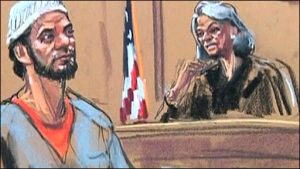 Shahzad stated, “If I am given a thousand lives, I will sacrifice them all for the sake of Allah fighting this cause, defending our lands, making the word of Allah supreme over any religion or system. We Muslims don’t abide by human-made laws, because they are always corrupt…we don’t accept your democracy nor your freedom, because we already have Sharia law and freedom…the defeat of U.S. is imminent and will happen in the near future, inshallah, which will only give rise to much awaited Muslim caliphate, which is the only true universal world order…Blessed be the immigrants and the leader Sheikh Usama Bin Laden, who will be known as no less than Saladin.”

Judge Cedarbaum, demonstrating no apparent knowledge of Saladin and his jihad against non-Muslims stated, “He didn’t want to kill people.  He was a moderate man.”

In January 2016, Muslim Edward Archer shot a police officer in Philadelphia, Pennsylvania while shouting “allah u akbar” and told police he did it in the name of Islam.  Philadelphia Mayor Jim Kenney stated the shooting had “nothing to do with being a Muslim.”

The President of the United States, the National Security Council, Cabinet members, mayors, pastors, and leaders in the West at all levels continue to perpetuate the lie Islam does not teach violence against others, despite the fact the only definition of “Jihad” in Islamic law is “warfare against non-Muslims.”

At the elementary school level and at the highest institutions of Islamic jurisprudence Islam teaches jihad is a permanent obligation until the entire world is under Islamic rule – sharia – and jihad is the vehicle to do it.

Where is the “other” version of Islam taught?  It is not.

Acts of jihad we witness around the world and in the United States each week are not done because Muslim have mental disorders, do not have jobs, need more money or Pepsi cola, or because of American foreign policy.

They do it because it is a permanent command from Allah to do so.

Those participating in the American legal system, specifically judges and attorneys, have a legal and professional duty to understand what Islam is as it relates to the flood of cases across our nation, and must do so if we are to have any chance of stemming the enemy in the legal arena.