One Year After Worst Shooting in U.S. History Police Have “No Motive” & Suspect is Walking Free

One Year After Worst Shooting in U.S. History Police Have “No Motive” & Suspect is Walking Free

On October 1, 2017, 58 people were killed and 851 wounded in the worst shooting attack in American history.  The Islamic State said they were going to attack Las Vegas and claimed responsibility for the attack after it happened.

The FBI and the Las Vegas Sheriff still claim they have “no idea” what the motive was for this attack.

Facts on the Table

The Islamic State publicly stated Las Vegas was a target, then claimed credit for the attack, explaining the man founded dead inside his hotel room on the 32nd floor of the Mandalay Bay, Stephen Paddock, converted to Islam a few months prior and was a “soldier of the caliphate.” 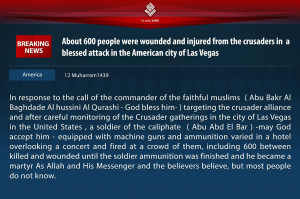 UTT’s analysis of the facts as we know them today reveal:  Paddock conducted pre-operational surveillance on several targets before settling on Las Vegas; Paddock initiated the assault prior to his planned time because his preparations were interrupted by a security guard, making it more likely more shooters were going to join him since there were many guns and two shooting portals in the two separate rooms on the 32nd floor of the Mandalay Bay rented by Paddock; the Las Vegas Sheriff revealed Paddock left no suicide note, and all other evidence points to the fact Paddock intended to escape after the attack; and because the Islamic State has never claimed an attack in the West in the manner they did for this attack – and claimed it 4 times – when they were not responsible.

Then there is the curious case of Australian Brian Hodge, a left-wing activist who currently resides in Los Angeles, California.

By his own admission, Hodge was inside one of the two rooms rented by Paddock, and on the 32nd floor during the shooting.  Hodge told reporters he hid in bushes outside the Mandalay Bay for “three and a half hours” when in fact the shooting was over in approximately 20 minutes and Hodge was ten miles away shortly after the shooting.

Hodge ended up being at a motel in Las Vegas (Knotty Pine) with three individuals from an area in Mexico with high Islamic State activity.  Coincidence?

Then from October 2-4, Hodge traveled to New Mexico and spent time in a restaurant owned by a Turk who is on a Watchlist and hails from an area in Turkey with high Islamic State activity.  Oddly, the restaurant owner has gone silent on his social media since a few days after the attack. 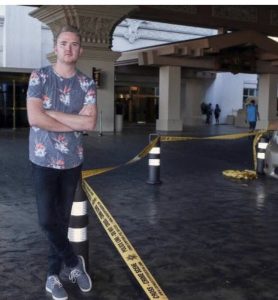 Posing for what appears to be a “trophy” photo, Brian Hodge stands outside the Mandalay Bay after the worst shooting in U.S. history in Las Vegas, Nevada

Notably, several people have now written about Brian Hodge being a suspect in this attack, yet Hodge has made no effort to clear his name or set the record straight.

Hodge has also not responded to UTT’s requests for an interview.

Since the worst shooting attack in American history, there have been no Congressional hearings, the FBI and the Las Vegas Sheriff’s Office never looked as the Islamic State as a possible suspect in this attack, and over 900 Americans are dead/wounded without even a hint authorities have any desire to get these questions answered.

Worst case scenario – this was the first joint Islamic State/Antifa attack in the United States.

What can you do?  Ensure your sheriff’s office and local police department understand the Islamic threat, specifically, the Muslim Brotherhood network, their modus operandi, and sharia (their doctrine), because knowing this information radically changes how police do their jobs on a day to day basis regarding attacks such as this.