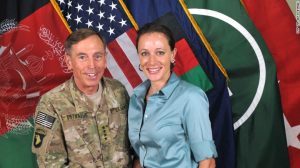 I travel across America teaching and briefing on the threat from the Muslim Brotherhood’s Movement here and how they (and others) have insinuated themselves into the highest levels of our government and national security apparatus.  The one question I most frequently get from Members of Congress, local/state/federal law enforcement, military and intelligence professionals, state legislators, and citizens is this: How is it possible that the enemy has gained access to our senior leadership without any apparent resistance?

I believe the current scandal involving General Petraeus is instructive in answering this question.

Our greatest national security weakness from a leadership standpoint is the staggeringly unprofessional inability of U.S. leaders to discern between friend and foe. They simply appear to have no radar for an enemy who comes at them wearing a suit (or dress) and a smile.

At the center of the Petraeus scandal is a young attractive woman named Jill Kelley, whose complaints brought General Petraeus’ affair with Paula Broadwell to light. Kelley, whose maiden name is Jill Khawam, is of Lebanese decent and her family arrived in the United States in the 1970’s. She is the 37 year old wife of an oncologist in the Tampa, Florida area. The U.S. military has described her as an “unpaid social liaison” – whatever that is. Most importantly, through her social activities surrounding the military Jill Kelley managed to gain access to a large number of U.S. 4-star generals and admirals, many of whom have attended functions in her home. And, according to sources, no one inside the military intelligence community has conducted any type of investigation into Mrs. Kelley’s background. This raises serious counter-intelligence questions.

One must assume that all it takes to get close to senior American officials is to appear to be friendly and helpful, and you are in the door. No need to look at any background information, facts or evidence. Just take their word for it. It works for the Muslim Brotherhood, so why not in other areas.

What is astonishing, is that at no point is there any indication, neither publicly or according to sources close to this issue, that anyone asked the right question. Who is this woman? What are her true intentions?

The U.S. Central Command responded to their own relationship with Jill Kelley by issuing a statement which included the following: Jill Kelley held “no official position with the U.S. Central Command. She is a volunteer and a private citizen, not an employee.” This is true. However, what Jill Kelley did have was influence. She appears to be the kind of woman who can pick up a phone to any one of a number of 4-star generals, base commanders or the FBI, and get a response. From an intelligence and counter-intelligence perspective, Mrs. Kelley bears many red flags of an intelligence officer, and her activities look an awful lot like a successful intelligence gathering operation.

To be clear, at this point in time, we cannot say – and I don’t believe – Jill Kelley is working on behalf of a foreign intelligence agency.  This may all simply be an unsavory affair gone public.  However, if she were working for a hostile foreign government, she would be given an award for her ability to be welcomed into the senior levels of the U.S. military without even a second look.  “Just look good, sound good, and tell them you want to do good, and the Americans will believe you.”  Words similar to these come right out of the playbooks of the Soviets, the Muslim Brotherhood, and many others.

Does America still have a counter-intelligence apparatus?  If so, it appears to be non-functional above the GS-14 paygrade.

Here are the questions Americans should be asking themselves and their elected officials:  1) How is someone like Jill Kelley able to get very close to and have relationships with so many senior American military officers without a formal vetting process or investigation?  (2) Is their formal and detailed counter-intelligence training for American civilian and military leaders which trains them to be aware of, identify, and report attempted penetrations and recruitments by foreign intelligence services?  (hint: the answer is no – a one hour online course every three years doesn’t count); (3) Do the standard procedures for vetting government employees and contractors for security clearances readily highlight counter-intelligence threats? (hint: the answer is no).

We seem to have quickly forgotten the tale of Nada Prouty, the attractive FBI Special Agent who also became a CIA Case Officer.  Prouty, a Lebanese national, fraudulently gained her citizenship through a sham marriage.  She was able to get hired by the FBI and then by the CIA.  Her sister and brother-in-law attended Hizbollah fundraisers, and her brother-in-law has a close relationship with at least one senior Hizbollah leader.

Note: Hizbollah is an arm of the Iranian government and a designated Foreign Terrorist Organization (FTO).

Prouty pled guilty to searching FBI data systems to see if her family members were linked to Hizbollah.  Prouty was given a full background investigation and a polygraph examination before being hired by the FBI.

As a seasoned FBI agent told me years ago, “When I came into the FBI, anyone who approached me was a potential target of an investigation or a potential source, until proven otherwise.  We were taught to keep our guard up.”  This mentality seems to be gone inside the agencies charged with protecting the citizens of the United States, and apparently among senior military leaders as well.

This dangerous naivete is destructive to America’s national security in immeasurable ways.  If this attitude is as prevalent as it appears to be among U.S. leaders, Americans are in even greater danger than previously thought.