President Trump announced last week the United States will move the U.S. Embassy in Israel to Jerusalem.  The Islamic world called for “Days of Rage.” 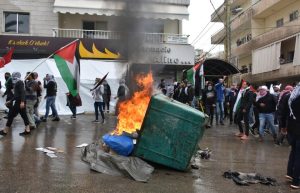 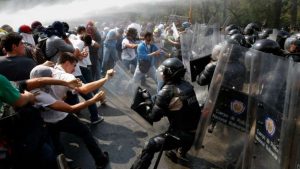 Over the last several days: 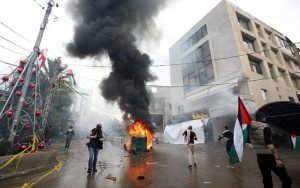 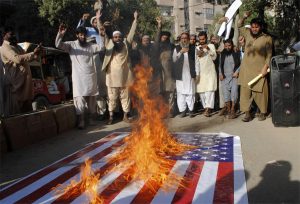 Pakistanis burn a representation of the U.S. flag during a protest rally in Hyderabad,

First fact to lay on the table:  Islam has no claim to Jerusalem – neither in its faith nor in its history.

The holy cities in Islam are Mecca and Medina, and, by the way, non-muslims are not allowed there.  There was a brief period of time when Islam’s prophet Mohammad had muslims face Jerusalem to pray in an effort to coerce and influence the Jews to support him.  When the Jews did not, Mohammad killed them and muslims went back to facing Mecca for prayers.

In 682 AD, a rebellion led to Mecca being seized and closed off for the hajj for muslims.  The caliph at the time made a spurious justification for using Jerusalem for the muslim pilgrimage since it was under the control of the caliphate at the time.

Jerusalem is not even mentioned in the Koran.

However, the single point of contention made by Islamic leaders to the President’s decision is the claim that moving the U.S. Embassy to Jerusalem strips the U.S. of its ability to objectively broker peace in the Middle East.

This begs the question:  What do all of these muslim protesters, Islamic nations, and the Palestinian leadership mean when they say they want “Peace?” 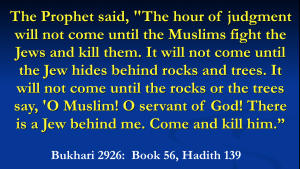 In Islam, “Peace” is the state that exists when the entire world is under the control of the Islamic State (caliphate) and sharia (Islamic Law) is the law of the land.  Additionally, Islam requires the holocaust of the Jews.

The Islamic world has been calling for the destruction of Israel since its official statehood seven decades ago.

Where is the “common ground” here?  Is true peace with Islamic nations possible?