On January 5, 1919 Germany’s National Socialist Party (NAZI) formed as the German Farmers’ Party. When the Nazi party took over power in Germany in 1933, Adolf Hitler created the Ministry of Propaganda and Public Enlightenment under the rule of Joseph Goebbels.

The Nazi’s ability to turn public opinion through its control of the media, film, education, and the like gave it momentum inside Germany to do much of its work to prepare for war and brutally slaughter the “unwanteds” inside that nation.

How does a nation get to the point it is willing to allow millions to be killed in the ways the Nazis did?

It begins with propaganda.  The Nazis and Communists were masters of propaganda.  And so are the leaders of today’s Islamic Movement.

In the war of narratives, the Islamic Movement seeks to present the image that the “moderate” muslims are a much better option than the violent jihadis of ISIS, Al Qaeda, Hamas, Hizbollah, et al, thus driving American leaders into the arms of “suit-wearing jihadis” with whom they can and do work.

The problem is that both sides are hostile enemies of the United States.

The enemy’s success in the propaganda/information campaign can easily be identified by the fact that 15 years after 9/11/01 America’s leaders still think there are different definitions of “jihad” in Islamic Law (sharia) – one of the many results of a long propaganda campaign by our enemy.  This particular one pounds the drum stating the “Islam means ‘peace’.”

It is a matter of fact that ISNA (Islamic Society of North America), ICNA (Islamic Circle of North America), MAS (Muslim American Society), MSA (Muslim Students Association), MPAC (Muslim Public Affairs Council), and many other Islamic organizations are a part of the Muslim Brotherhood’s Movement in the United States with the mission of waging “civilization jihad” to destroy western civilization and replace our government with an Islamic government.

And these are the organizations behind the major propaganda operations in America today.

The following is a mere sampling of propaganda/information operations currently underway inside the United States: 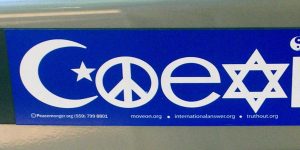 Details:  Produced, in part, by International ANSWER, a hard-left organization whose “Steering Committee” was created 3 days after 9/11 and includes the National Muslim Students Association.

Purpose:  Moral relativism.  To show Islam is no different from Judaism or Christianity and simply wants to “coexist” (not assimilate) with the rest of society. 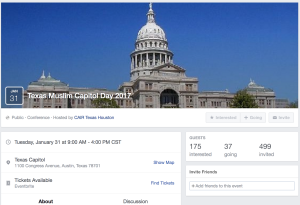 Details:  Sponsored by Hamas (dba CAIR).  This is a day when muslims flood state capitals to, in their words, “meet state legislators, discuss issues of concern and help bring about positive social change.”

Purpose:  A show of force and intimidation at state capitals to give the impression muslims can win or lose elections for state legislators, and therefore, state legislators should submit to their demands.

Campaign:  Paid trips to Saudi Arabia for Members of Congress.

Details:  Saudi Arabia and their representatives take Member of Congress overseas to Saudi Arabia on 10 day trips to show legislators how “progressive” the Kingdom is towards business and other parts of its society.

Purpose:  To show Members of Congress a facade of the true Saudi Arabia so they have a favorable impression of the nation and will be softer on their actions when legislative matters involving the Kingdom arise.  It pits those who speak factual truth about Saudi Arabia’s support for terrorism, sharia, and anti-American efforts against the Congressmen’s newfound personal experience in the Kingdom.

The same campaign exists at the state level for trips to Turkey sponsored by Turkish Muslim Brotherhood organizations such as the Turquoise Foundation, Holy Dove Foundation, and others. 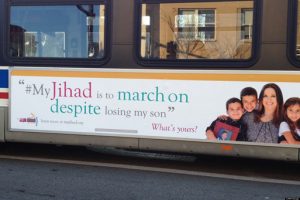 Details:  This series of videos, billboards, signs, and advertisements produced by Hamas (dba CAIR) shows muslims sharing about their various forms of jihad – doing their homework, helping others, and other such things.

Purpose:  To give the impression that jihad is defined as anything but “warfare against non-Muslims” to establish the power of Islam despite the fact all Islamic law defines it as such.

Campaign:  After “terrorist attacks” Americans should be most concerned with “backlash” against muslims

Details:  Following attacks against U.S. citizens by muslim jihadis, leaders from the Islamic community speak on television telling America they fear for their lives because of the constant backlash against them from non-Muslims despite the fact FBI information reveals this phenomenon does not exist.  U.S. Olympic fencer Ibtihaj Muhammad, who wore a hijab during the Olympics, publicly stated, “I don’t feel safe in America.” 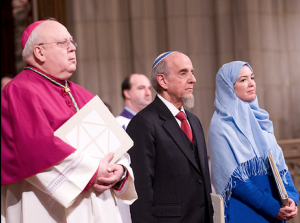 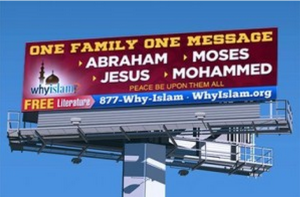 Details:  Primarily led by ISNA and ICNA, the Interfaith Outreach movement targets churches and synagogues of all denominations to come together under the belief that Judaism, Christianity and Islam share one God and three Abrahamic faiths.  They adjust their message for Catholics, protestants, and other denominations to get the message to strike home more effectively.

Purpose:  To subvert religious institutions which are the backbone of American society. It should be noted that by the very fact Christian organizations engage in interfaith outreach with the Muslim Brotherhood, they have to surrender their core doctrinal beliefs to meet muslims at a place which often puts them in positions of heresy.  This furthers the MB’s broader strategy of destroying the non-muslim citizens’ faith in their religious leaders.

Details:  Formed by the AJC (American Jewish Committee) and ISNA, this organization purports to be designed to fight Islamophobia and anti-semitism.  It should be noted that in the US v HLF, the U.S. government identified ISNA as the “nucleus” of the Islamic Movement in North America and a financial support entity for Hamas, a designated terrorist organization which calls for the destruction of Israel.

Purpose:  To further subvert the Jewish community, and its leadership around the narrative that both Jews and Muslims are being persecuted.  The muslim intent is for Jewish leaders to protect the Muslim community from the kind of persecution similar what happened to Jews in Germany during World War II.  It appears to be working as many Jewish leaders and organizations in America today openly support and defend Muslim Brotherhood/Hamas leaders and organizations – the very people who seek their destruction.

Details:  Billboards around the United States have been used to promote Sharia and Islam and give citizens a means to ask questions.  These campaigns, as many of the billboards openly state, are sponsored by ICNA.

Purpose:  To normalize Islam and Sharia in our society in preparation for Islam to rule our society under Sharia.

Campaign:  Control Hollywood’s Depiction of Muslims in Film and Television

Details:  Hamas (dba CAIR) and the Muslim Public Affair’s Council (MPAC) in Los Angeles work diligently to ensure muslims are only portrayed in a positive light in both TV shows and film.  They have strong-armed producers, even before films were in production, based on the scripts.  One example: “Sum of All Fears” – storyline was originally muslim terrorists but, because of pressure from CAIR, the antagonists were portrayed as Nazis in the film.

Purpose:  To ensure Americans only see Islam in a positive light and to keep the factual teachings of Islam – “Fight and slay the unbeliever wherever you find them…” (Koran 9:5) – from ever coming to light.

Details:  Amazon released a commercial just prior to Thanksgiving Day 2016 depicting an older priest and imam hugging each other and sharing time together as close friends.  They both use amazon.com to purchase gifts each other (knee pads) to make it easier when they pray.  The commercial ends with the two praying in their respective places of worship using their knee pads.

Purpose:  This commercial was made in partnership with Amazon, ICNA, and the MCB (Muslim Council of Britain).  Since the MCB is one of the top two largest MB organizations in Britain, and ICNA is part of the MB Movement in North America, we know there is a nefarious purpose for this commercial.  The Muslim Brotherhood does not do willy nilly.  This commercial is meant to affect long-term attitudes in the West with regards to relations with the muslim community.  It portrays the Islamic culture as being relatively the same as Western culture and easy to get along with, completely ignoring the diametrically opposed ways of life between the two.

Details:  Hamas (dba CAIR) created a gum and a campaign to back it up which is humorously supposed to cure Islamophobia.

Purpose:  To ostracize anyone who speaks truth about Islam and to make it easier for people to accept the growing influence of Islam in our society.

These are but a few examples of the propaganda being poured out onto American society today.

To be clear, easily identified enemies of the United States are behind these propaganda campaigns, and many others. With a large percentage of U.S. media supporting the jihadis in the United States, there is no major counter-messaging to this nonsense.

Propaganda is necessarily made up of lies.  Truth is the only answer.

Only citizens armed with the truth about what Islam is can defend our society from the growing cancer of Islam here, and reach out in wisdom and love to free muslims from a system which necessarily enslaves them.