Why wouldn’t Saudi Arabia, Qatar, and all other wealthy Muslim countries fund ISIS, ISIL, or whatever we are calling the leading army of Mohammad this week?

In the latest Wikileaks download, a series of emails between then Secretary of State Hillary Clinton and John Podesta, former Chief of Staff to President Bill Clinton and Counselor to President Obama, dated August and September 2014 reveal Saudi Arabia and Qatar are funding and providing support to ISIS.

In the email Mrs. Clinton states:  “We need to use our diplomatic and more traditional intelligence assets to bring pressure on the governments of Qatar and Saudi Arabia, which are providing clandestine financial and logistic support to ISIL and other radical Sunni groups in the region.” 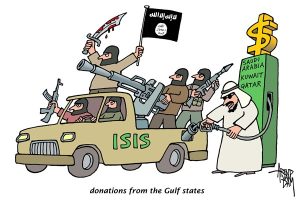 We know from the recently released portions of the 9/11 Report a large volume of evidence exists revealing Saudi Arabia funds jihadi training materials and Islamic Centers/Mosques in the United States, among other direct support to fund the global jihad against the U.S. and the West.

Pakistan provided direct support via their intelligence agency (ISI) to Al Qaeda fighters after the attacks on the United States on 9/11/2001, and, provided safe haven for Osama bin Laden.

Turkey’s policies and open hostility towards the United States make clear they cannot be trusted at all.

Saudi Arabia and Qatar are giving financial and logistical support to ISIS.

The questions that remain:

*Why are key facilities in Saudi Arabia and Qatar not on our target list?

*Which Muslim country in the world is not hostile to the United States and supporting the armies of Mohammad (ISIS, Al Qaeda, Hamas, etc)?